Since our last update, Arsenal have announced another signing, the Premier League fixtures were released, Gabriel is almost an Arsenal player, Arsenal are ready to pay full whack for Thomas Partey, and Auba’s new deal will be announced soon.

You’ll find all the juicy transfer gossip at the bottom.

Arsenal will start their 20/21 Premier League campaign with a trip to Craven Cottage to face Scott ‘Football Writer’s Manager of the Year 2021’Parker’s newly-promoted side.

Arsenal have finally launched their 20/21 away kit and it is now available to buy onlie. It is believed Arsenal will wear it during Arsenal vs PSG Feminines this weekend in their Champions League quarter final.

The away kit promo video.

Adidas: "The shirt has a bespoke, hand-drawn design which uses the colours off white, maroon, and black – and the natural pattern of the marble – to represent the details of the marble halls that saw Arsenal lift the league title thirteen times." pic.twitter.com/LgKwpQW6WR

Emi Martinez has been chatting about needing minutes again. I’ve lost count, I think this is the third time he’s said he’ll leave if he doesn’t play. I think Arsenal get it, Emi.

Willian has been speaking to EPSN in Brazil about how he had no intention of leaving Chelsea but felt ‘discredited’.

This follows after he said he was offended at how Chelsea handled his contract negotiations, reportedly offering him a two year deal before the lockdown and refusing to negotiate after that.

He has also been speaking to Arsenal about what Gabriel Martinelli and David Luiz said to him before he joined the club:

I’m also fairly sure the Daily Mail have ordered all headline writers to mention that Willian is earning £220kpw even though that includes all his bonuses and is not actually his weekly wage.

The away kit is being probably being launched this week. Simon Collings from the Evening Standard tweeted to say it was being launched later this week and that Arsenal’s women would wear it against PSG in their Champions League quarter-final this weekend, but he seems to have deleted the tweet.

Pierre-Emerick Aubameyang will sign a new deal with Arsenal this summer, with only the final paperwork and announcement left to come.

Napoli want to sign Sokratis Papastathopoulos from Arsenal, regardless of the fact the two clubs are competing for fellow centre-back Gabriel Magalhaes.

Joe Montemurro has been speaking ahead of Arsenal vs PSG Feminines this weekend in the Champions League quarter-final.

“I think there’s a real hunger because we’re representing this great club in the most prestigious tournament in the world,” he told Arsenal Digital.

“We’re a united group that loves putting on this strip and being part of this tournament. We want to give that every opportunity and we’re delighted that we got the opportunity to finish the tournament, and that we are in the top eight in Europe. That alone is a massive achievement but I do believe that we have the opportunity to go further.”

Arsenal will qualify for next season’s Champions League only if they win the tournament.

Montemurro has also been praising one of Arsenal’s latest additions, Malin Gut.

Arsenal announced the signing of George Lewis on Tuesday and the 20-year-old winger will initially join up with the u23s.

Speaking to Arsenal.com, Lewis said, “My playing style is very direct. I like to dribble a lot, I like to express myself on the field, so they can expect a show from me, yeah!”

Arsenal have reportedly given a trial to former Queens Park Rangers youngster Kayden Harrack, 16, who can play at centre-back or in midfield.

Arsenal have also told Ben Sheaf he is free to leave this summer on a permanent basis. Coventry have been thinking over a six-figure bid and it’s now being reported that the club want £750,000 for him.

Arsenal are set to sign another young player on a free transfer, bringing in Jonathan Dinzeyi after his release from Tottenham Hotspur.

On Tuesday it was reported that Arsene Wenger had phoned up to ask about taking over the Netherlands national team job when Ronald Koeman moved to Barcelona, a job Wenger turned down. But it seems it’s all just nonsense, unless Wenger is lying.

It has, however, been confirmed that Koeman is the new Barcelona boss.

Cesc Fabregas, meanwhile, has been talking about the moment he fell in love with Arsenal.

“The first game I watched after I moved in was the Man United vs Arsenal game from 2003 where Ruud van Nistelrooy missed the penalty,” Fabregas told The Athletic.

“I watched it with Paul, Mark and Noreen at the house, and I couldn’t believe it. The amount of shouts, the passion they showed for the game and for Arsenal. It was unbelievable.

“I found that feeling very soon with Arsenal. I knew very, very quickly how special that club is. They made sure I understood from day one.”

Fabregas added: “I wasn’t homesick because I knew what I was there to do.

Alan Smith has warned Mesut Ozil he will ‘live to regret wasted years’ if he doesn’t leave Arsenal.

Lille have now reportedly accepted offers for Gabriel Magalhaes from Arsenal, Napoli and Everton, who were supposed to have withdrawn from the race and probably have.

According to Telefoot in France early on 19th August, Arsenal had offered the 22-year-old defender a five-year deal which he was keen to accept but Napoli reportedly upped their salary offer for the player ‘considerably’.

It is expected that this will all come to some sort of conclusion by the end of the working week. Then again, the Lille president also thought it would all be sorted out by the end of July, yet here we still are.

We could, however, be nearly there.

Later on 19 August, it was reported, again, that Gabriel had made his decision. He has said ‘yes’ to Arsenal’s five-year deal:

Gabriel Magalhães has chosen to join Arsenal on a five-year deal. The transfer fee is around €30m. [@LOSC_fs] #afc

This was also reported in the Times, about which you can read more here. And then L’Equipe said it’s all nearly done:

Arsenal have told Thomas Partey and his camp that they’ll pay his release clause to Atletico Madrid soon.

Arsenal are still in negotiations with Real Madrid over another loan for Dani Ceballos for next season, according to reports in Spain. 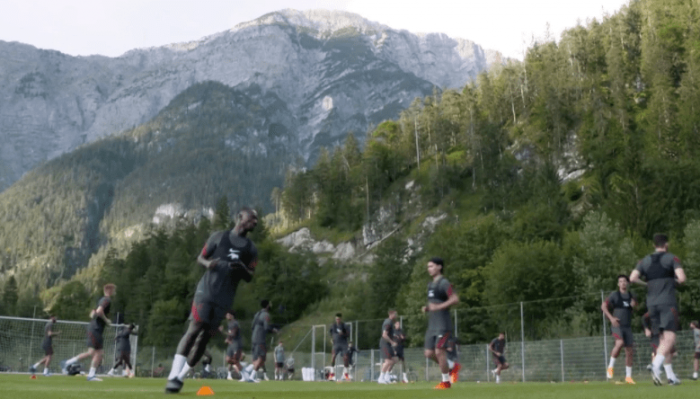 A Liverpool player has tested positive for Covid during their pre-season in Austria. The Daily Mail report that they are still carrying on with preparations for the Community Shield as planned.

Arsenal vs Liverpool in the Community Shield is due to take place on Sunday, 29 August 2020.

Abdoulaye Doucoure is ready to join Everton but Watford are holding out for £25m. [Daily Mirror]

Former Premier League and Senegal striker Demba Ba has called on football to condemn China’s treatment of Uighur Muslims, whatever the financial cost.

Mesut Ozil has already done this and Arsenal hung him out to dry so they could stay on the good side of China.