Mesut Ozil has thanked Jerome Boateng after the player backed him following this summer’s events.

Ozil has found himself under attack for months now. Despite his allegations of institutional racism, the majority of the DfB setup, mainly the white, single nationality members, have all been quick to dismiss his claims. It should come as no surprise, then, that he has the backing of players who don’t fit that demographic.

It’s almost as if white, single nationality Christians aren’t the target of any sort of racism so don’t notice it.

“Where were the players, who then publicly thanked Mesut?” Boateng asked in an interview with Munich-based Sueddeutsche Zeitung this week.

“Apparently, many did not dare to comment because they thought that would not be so popular with German fans.

“It’s about a great player, who became world champion with us, who played fantastic games, who also changed German football a bit. A number 10 with a migration background!

“You have to say ‘thank you’, but I find it a shame that some held back.”

“Thanks bro, for your words,” he wrote in an Instagram story on his official page.

“At the DFB, you were always one of the players who was there during difficult moments.” 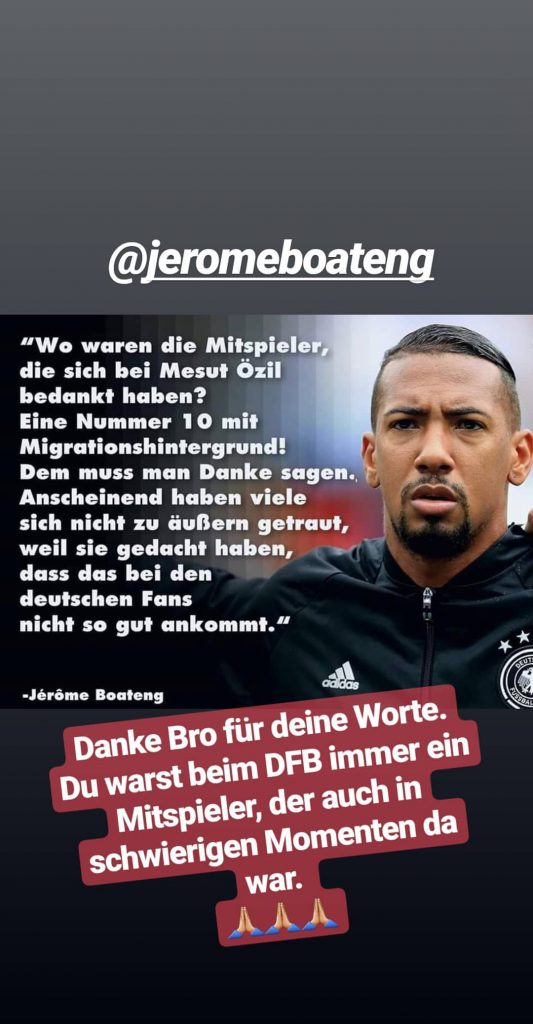 Although we’ve heard a lot from white, single-nationality Christian Germans, we haven’t head much from those who don’t fall into that camp. That, in itself, is telling.

While Ozil, who is calling for something to be done to stop the racial discrimination he feels he receives as a dual-nationality German, has seemed like the lone voice in this debate he has had the backing of a few players but they have been amplified significantly less by the media.

Jerome’s brother, Kevin-Prince, has also spoken out in defence of Arsenal’s midfielder.

I did not expect it,” Boateng told Bild about Ozil’s decision. “I think it was a reaction from the stress, and I’m talking from experience, I know what it’s like when everyone comes at you when you’re really harshly criticised when your family gets hit.

“It’s alarming that this will happen and that it will be more and more, we have to wake up quickly, we have to do something about it,” Boateng insisted when asked about the videos showing groups marching through the streets at a far-right demonstration recently after a German man was involved in a fight with two Afghani nationals.

“There are 2,500 people walking through Chemnitz doing the Hitler salute. These pictures and videos go out into the world, they shamelessly use a whole city as a projection screen for their activities. You have to shut it down, you cannot simply accept it.”

While Ilkay Gundogan has also backed up Ozil’s view of events and Jerome Boateng also called criticism of the player ‘unfair’, Toni Kroos joined the likes of Uli Hoeness, Joachim Low, Karl-Heinz Rummenigge, Lukas Podolski, Per Mertesacker and others in denying racism is a problem.

Interesting groupings there, I’m sure you would agree.

“I think that it [the situation surrounding Ozil’s claims] doesn’t say anything about German football,” Kroos told reporters at a news conference.

“Respectively, for years we have been proving the opposite of what has been said. This was an individual case, a special one to which I expressed my opinion about a few weeks ago.

“Particularly the racism charges against the DFB and the president, I can only refuse in my opinion.

“Everything that happened around it, in the stadiums or in other statements, I did not comment on, but only the accusations against the DFB and the president, which is part of the DFB.

“And this is absolutely to be rejected. In this form and harshness, it was not appropriate.

“I think we have proved the contrary for years, and we as a national team have been a role model for all society on how it [integration] can work.

“Players of every culture were welcome and [we] built together a team. That’s all on this topic.”

45-minute read: Mesut Ozil – A casualty of a divided world

Let’s take this slowly for those, like Kroos, who are struggling with this. I’ve said it all before but I’m going to keep repeating it until these people grasp how it works.

Mesut Ozil charged the DfB with racism, Ilkay Gundogan said he suffered racial abuse. Neither said there was racial abuse within the squad.

Reinhard Grindel, the DfB president even admitted he should have done more to protect Ozil yet many still have an impossible time wrapping their heads around a simple concept – just because you do not see or experience discrimination, it does not mean it does not exist!

Nor can many tell the difference between ‘racism’ and ‘racial abuse’.

Those who suffer from any sort of discrimination, be it because of their race, gender or sexuality are well-tuned to picking it up, even in its most subtle forms. People like every Bayern Munich puppet who has spoken against Ozil, Per Mertesacker, and Lukas Podolski who also said racism is not a problem in the German camp, don’t experience the discrimination so rarely, if ever, notice it because it doesn’t concern them.

This isn’t a hard concept to grasp if people would stop taking it as a personal accusation that they are racists and understand that it is possible for someone to feel discriminated against without you noticing. That doesn’t mean you are actively participating, but please, for the sake of common sense, can we stop telling people from minorities what they feel and experience doesn’t exist or matter.

THREAD: Biggest conclusion from the Özil debate so far: most football people have no idea what racism means

They think of racism in naive direct terms, like when somebody says “You’re other, so I hate you”

It’s that form of racism, to be judged differently or more harshly, that Özil rightly highlighted, which footballers completely ignore

If Ozil was as mentally weak as his detractors would have us believe, then the events of this summer should have destroyed him. He has been all but abandoned by his home country that worshipped him for years, blamed for their failure at the World Cup despite helping win it for them four years earlier, left to stand on his own as he challenges racism, and had to watch as his character is dissected and devalued in public across the world.

Who wouldn’t crumble under the weight of that?

45-minute read: Mesut Ozil – A casualty of a divided world

But, in fact, Ozil hasn’t crumbled. He has, however, been left swinging by the majority of his national teammates and that must feel like an unbelievably lonely place to be right now.

We don’t all live in the same world. It’s time more people realised that.

Arteta: Martinelli has the capacity to start games