With no game this weekend for Arsenal, Manchester City took advantage to draw level on points with a 1-0 win over Birmingham City.

Manchester City have now closed the gap on Arsenal thanks to their 2-0 win against them and this weekend’s win.

It’s a pity that the game came at a time when Arsenal were so impacted by injuries, leading to their first defeat of the season. It also gave City momentum and Arsenal will have to get back into the groove when the league restarts next year on  6 January.

Arsenal’s final game of the calendar year will be away to Millwall in the Continental Cup.

There will be a lot of familiar faces with Chris Dicketts, our former development team manager, now in charge alongside GM Pedro Losa. There are also seven ex-Arsenal youth players that we know very well.

With Arsenal already through to the quarter-finals and needing only a point to secure first place, the expectation is that we will see a young team featuring a number of Academy players, both from the start and the bench.

There is absolutely no need to risk any senior player who is carrying a knock in this game. Six or seven senior players alongside some youngsters will give the Academy players a great chance to learn about the first team environment.

It might also come in handy over in future seasons as well when they get more chances at this level.

The Academy season so far

The team is led by Lauren Phillips and currently sits in seventh place out of 12 teams. 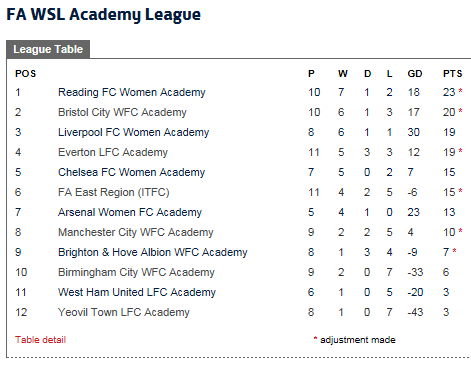 As we can see in the table above, they have not played as many games as the other Academy sides and are still unbeaten.

There is a clear backlog of games as some sides have played 10 or 11 games compared to our five. Therefore, it is hard to know if the team is really a mid-table team or a top-of-the table team as expected.

There are two more games planned before Christmas.

Next Sunday they travel to Bristol to play at Bisham Abbey. The following Sunday they are at home to Everton, a match that will be played at Warwick University.

Is it time to replace Joe Montemurro at Arsenal?

How much is Gabriel Martinelli worth?