Arsenal are reportedly returning for 19-year-old Samuel Chukwueze who was supposed to sign for the club at the same time they signed Kelechi Nwakali. 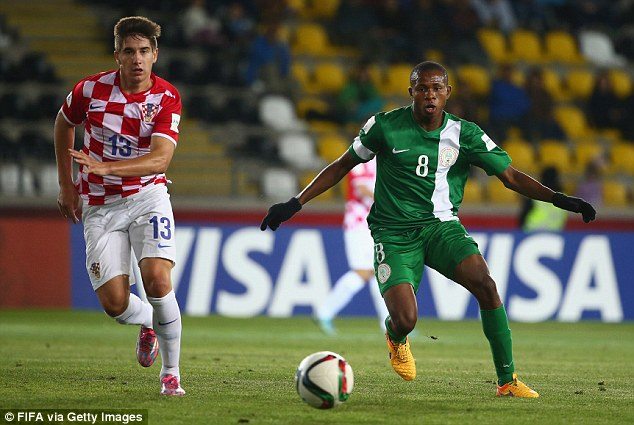 Back in January 2016 Arsenal were supposed to have struck a deal to sign the two Nigerians with Arsene Wenger even posing for photos with the pair.

Nwkalali was voted the Most Valuable Player at the u17 World Cup in Chile after captaining his side to glory in the tournament in 2016 and was the subject to interest from Manchester City and Bayern Munich who both wanted to land his signature at the time.

The then-16-year-old Chukwueze reportedly agreed to sign for the Gunners at the end of January 2016, along with his international teammate Kelechi Nwakali.

Speaking at the time of the deal, Diamond Academy president, Martin Apugo, said that he did not want the player to go to Arsenal. “Chukwueze is still joining Arsenal, he will travel any moment from now to start training with them,” Apugo told allnigeriasoccer.com.

“I didn’t want him to go to Arsenal, wanted him to go somewhere else but he said he’ll be happy if he goes to Arsenal.”

It seems like Apugo got his wish. Chukwueze eventually moved from Diamond Academy to Villarreal for £450k.

This season he has made an impact after being promoted to the senior team, netting four goals in 13 La Liga appearances. He also made his full Super Eagles debut back in October.

Now Arsenal are going back for him apparently.

The forward, who has been compared to Arjen Robben, will not be released easily, however Villarreal’s new head coach, Luis Garcia, recently said, “I was told about Chukwueze. He’s got speed, spark, he can dribble. He’s a jewel we have to take care of.”

Former Arsenal defender, Lauren, added,  “He is a very good footballer. Can score and also create, plus he is very good with the ball at his feet.

“He is the best and probably most complete 19-year-old I’ve seen in a while in the La Liga.”

The S*n reports that the player is valued at £45m but this is nonsense. It’s actually £4.5m but what’s a decimal point between friends? They also state that Chukwueze ‘continued his career in La Liga’ after his Arsenal move collapsed even though he didn’t move from Nigeria to Spain until a year later.