The captain of the Development side, Steele can play either at number 6 in front of the defence or in the box-to-box number 8 position.

Her versatility allows her to cover at right-back and center-back if needed, but her best position is definitely in midfield. She has a good short and long passing range, can tackle well and is physically strong.

Although there are some good players ahead of her in the first team in Bailey, Nobbs and Williamson, if she works hard, she might be able to make the breakthrough into the first team during the season.

Here’s what she had to say:

Can you tell us where and when you started playing football?

I started playing football for my local village team when I was about five (I was the only girl), then got scouted for Ipswich girls when I was six.

How long have you been playing from the Arsenal Ladies team?

I started playing for Arsenal when I was 14, so that makes it my 4th season here. 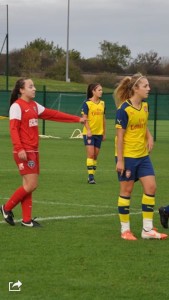 Do you play for England and have you been capped at different levels?

After that camp I was too old so moved up to the u17s – I’ve been part of several Euro u17 and u19 tournaments and have captained several games.

What are your football targets for the 2015?

I’d say to just keep improving as a player and give everything on, and off, the pitch. 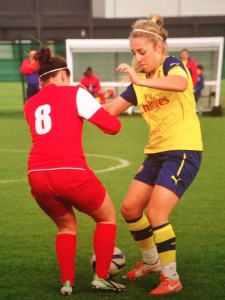 How do you manage spending a lot of time playing football and fit in your A-level studies considering you could have the u19 Elite round in April and also the u19 finals mid-July?

I just have to keep on top of all my work and be productive with my time.

It’s pretty tough as the subjects that I do aren’t easy, but I’m managing ok.

Do you plan to go University?

What is your main role/duty as the Captain for the Arsenal Ladies development team as you are the most senior player now?

I think it’s just to make sure, as a team, we are getting the most out of each other and doing as well as we know we should be.

A few others and myself were part of the squad that won the double last season so we know what commitment it takes to do this and have motivated everyone to try and replicate it again this season. 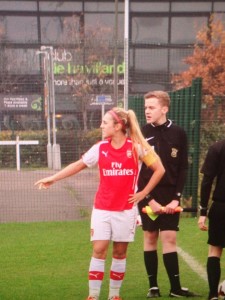 And our final questions will be about your team-mates in the Development team.

Best Trainer? Kelsey Kiely works really hard and is at every session.

Fastest? Got a few fast people but it’s probably Addy.

Worst Taste in Music? Hmm, no idea because DJ Abi sorts the music out for us to be honest

Who can Arsenal draw in the Champions League?

Arsenal release 2 at end of contracts