Arsenal face Olympiacos in their Europa League last 16 second leg on Thursday night so what’s in the media ahead of that game?

Well, as you would expect, Mikel Arteta and Thomas Partey did their obligatory media duties before the game.

If you haven’t already seen those stories, you can read Thomas Partey on how this is just the start of his life at Arsenal, what Mikel Arteta thinks about Martin Odegaard so far, facing Sokratis and the game itself.

In other news, Ian Wright has realised it probably wasn’t the best thing to mock Alexandre Lacazette on Match of the Day and reached out to the Arsenal forward.

In case you missed it this week, Jordan McEneff extended his contract with the club, Jordi Osei-Tutu has returned to Cardiff after recovering from his hamstring injury (but Joseph Olowu has retuned to the club with a calf injury), and Charles Sagoe Jr made his debut for the u18s despite only being 16. Hubert Graczyk has also signed a professional contract with the club.

Pep Guardiola has said he doesn’t understand the handball rule either: 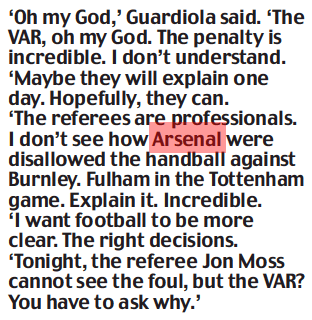 And I came across a piece from 2018 that really does highlight how the media (some sections at least) treat Arsenal differently: