Unable to send any first team stars to Rwanada because of the current pandemic, Arsenal players took part in the annual Kwita Izina for the third year running, this time remotely. 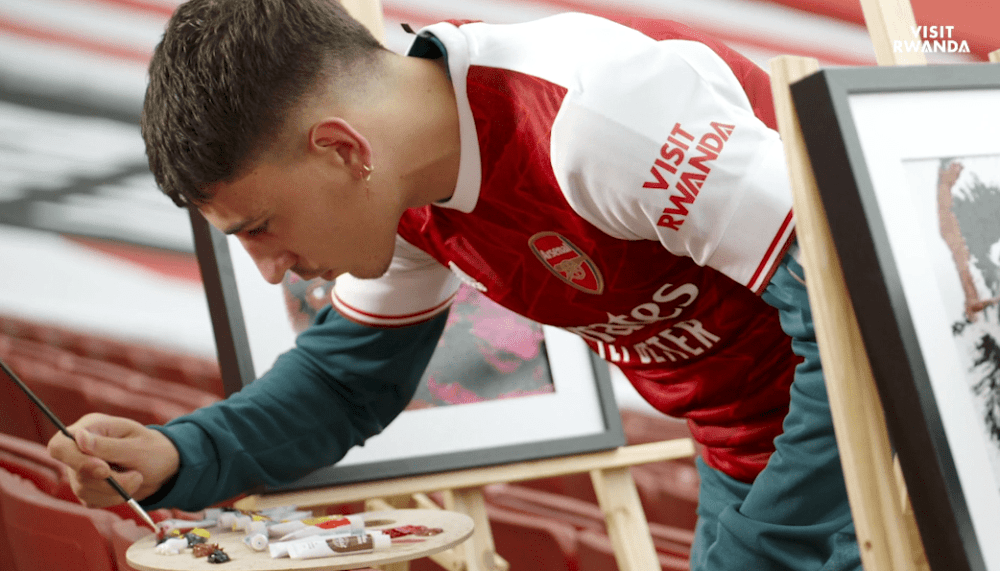 In 2018, Arsenal sent Lauren and Alex Scott to Rwanda to take part in the baby naming ceremony while last summer David Luiz was given the honour.

This year, Hector Bellerin, Bernd Leno and Pierre-Emerick Aubameyang, who would never have been sent to Rwanda, fulfilled the role.

Kwita Izina started in 2005 and is described by AllAfrica.com as ‘a uniquely Rwandan event with the aim of creating awareness of conservation efforts for the endangered mountain gorilla.’

In total, 23 mountain gorilla babies were named during the 2018 ceremony which seemed tailor-made for Aaron Ramsey, known for his love of wildlife and animal conservation.

Although his particular favourite seems to be the rhino, who doesn’t love a gorilla?

David Luiz spent his time during this international break in Rwanda with some of his family and the club have released a video of how that went.

Arsenal’s partnership with Visit Rwanda, that was struck in 2018 for three years and won an award, has seen a number of Arsenal legends travel to the country to take part in various efforts to raise the profile of the country.

This latest visit saw Luiz hit the country for a two-day break last week while the rest of the footballing world endured an international snoozefest.

He also took time to visit the Kigali Genocide Memorial were he learned more about the 1994 genocide that took place against the Tutsi which still hangs heavy over Rwanda’s global reputation.

Arsenal are obligated under the terms of the deal to send first team players from the men’s and women’s team to Rwanda while also providing coaches for clinics to help develop the game among children of all genders. They have also sent former stars to the traditional gorilla naming ceremony.

Rwanda reportedly saw an 8% increase in tourism in 2018 with 1.7 million people visiting the country.

While there was initial uproar over the deal, which struck me as quite hypocritical, dissent has largely fallen silent in 2019.

Rwanda expect Arsenal to send a first-team player to the country for their annual gorilla-naming ceremony known locally as ‘Kwita Izina’.

Arsenal’s participation is part of the deal which saw the country’s tourism office sponsor the club’s sleeves for £30m.

Speaking to the media in the country, the RDB Chief Tourism Officer, Belise Kariza, said, ‘a number of superstars’ have been lined up for the event which will take place on 7 September in Kinigi on the slopes of the Volcanoes National Park but he declined to confirm the names of the players who would be in attendance.

Arsenal were expected to send a ‘senior player’ to a gorilla-naming ceremony in Rwanda as part of their £30m sponsorship deal with the country but have sent Lauren with Alex Scott also on her way.

Back in July, it was reported that Rwanda expected Arsenal to send a first-team player to the country for their annual gorilla-naming ceremony, known locally as ‘Kwita Izina’.

Speaking to the media in the country, the RDB Chief Tourism Officer, Belise Kariza, also said, ‘a number of superstars’ have been lined up for the event which will take place on 7 September in Kinigi on the slopes of the Volcanoes National Park but he declined to confirm the names of the players who would be in attendance.

Timed as it is, during an international break, it looked like Arsenal might be able to fulfil Rwanda’s expectations but, alas, they sent Lauren and Alex Scott instead.

Of course, there’s absolutely nothing wrong with Lauren or Scott, but if Rwanda were expecting current first team members for their £30m, then surely Arsenal should have sent at least one.

Lauren arrived in the country on Tuesday with Alex Scott expected to arrive today [Thursday]. On Wednesday evening he was entertained at the Stade Peace in Remera where he met a girls and boys dance club and on Thursday his trip was celebrated before he headed to Kinigi for the ceremony on Friday.

About the mountain gorilla

“Hidden high among the forested volcanoes of East Africa, the mountain gorilla was unknown to science until 1902, when two were first encountered by a German explorer and promptly killed. It set the tone for the relationship. For much of the time since, due to deforestation and poaching, it has seemed that the mountain gorilla was swiftly destined to be lost to the world again. Not long after the species’ greatest champion, the American zoologist Dian Fossey was killed in Rwanda in 1985-there were fewer than 300 of the giant primates left in the wild.

“Today nearly half of the world’s 700 remaining mountain gorillas live in the Virunga Mountains of central Africa, at the intersection of Uganda, Rwanda, and the Democratic Republic of the Congo. The volcanic slopes here are lush with tropical forests and diverse mammal, bird, and reptile species but they are also at the heart of a region in crisis.”