Nwankwo Kanu was the king of the cheeky toe poke.

After signing for Arsenal from Inter Milan in 1999, he became the ultimate super-sub and a master poacher.

A striker whose first touch wasn’t perfect but his end result was always sublime. The forward consistently found himself in the right place at the right time and was unbelievably clinical.

In addition to this, he was a man Arsene Wenger described as brave; sticking a lanky leg out into danger in the name of winning the ball was a regular occurrence, happening almost every time he played.

However, due to the fact that he was on a team with some of the finest footballers to walk the planet, Kanu’s skill was often overlooked in favour fawning over other players. Thierry Henry, Marc Overmars and Patrick Vieira were all consistently showered with compliments – and deservedly so – but Kanu’s unique ability was repeatedly forgotten.

Speaking to the Arsenal website in 2012, Wenger said, “[Kanu] never complained, you could kick him everywhere and he never said a word. He was very brave and I have a big respect for him.

“He loves football because when you have his knees and you still play today, you must be brave, believe me!”

During Kanu’s career with Arsenal, in 182 appearances, he scored 37 goals, and many of these were the result of superb positioning and unrivalled tenacity to win the ball at all costs. The striker not only won points for his team by scoring, he also instilled hope and re-energised the team when he came on the pitch.

A shining example of ‘typical’ Kanu was his goal against Deportivo De La Caruna in the UEFA Cup. Arsenal were through to the final 16 and ended up winning 5-1. The goal in question was a lesson in pressing, spacial awareness and genuine football magic.

Kanu was through on goal before the ball was even at his feet, as if he could telepathically tell that something amazing was about to happen. Deportivo had the ball and were about the play their way out from the back but a wayward header fell into the path of Kanu who had made a searing run down the middle of the pitch, already anticipating a mistake from the opposition. In contrast to the freneticism of the run, the striker then dribbled the ball calmly round the goalkeeper and into the net.

It was audacious, confident and spectacular to watch, and it pretty much summed up Kanu’s entire career at Arsenal.

Even if he didn’t have the ball at his feet, defenders could never let their guard down, not even for a split second, because the Nigerian would be upon them and at the corner flag celebrating before they’d had a chance to recover.

Once he had the ball, there was no doubt that he’d finish. It wasn’t in his nature to miss.

Of course, the Nigerian wasn’t just about nicking the ball and converting it into valuable goals. He also had breathtaking skill. The striker had a way of winding round goalkeepers, leaving them completely dumbfounded. His long legs appeared to be moving through treacle, yet the rest of the world seemed to slow down even further, as if they were all watching with baited breath to see what he would do next.

Sometimes, he appeared to be toying with them; choosing to dribble it past the goalie and pass it between his own feet, rather than simply slot in an easy finish from a few yards out. 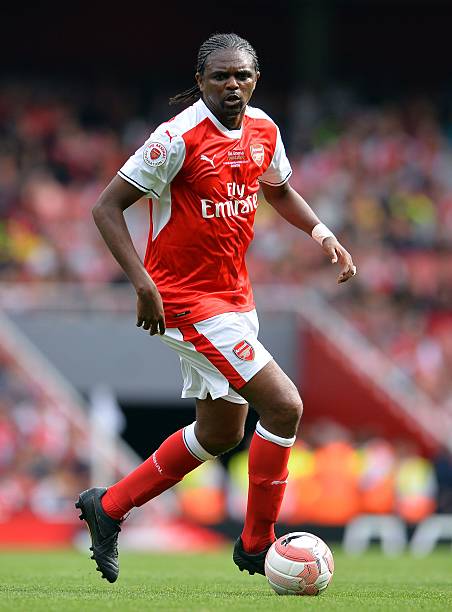 In a match against Middlesbrough during the 1998/99 season, which ended 6-1 to Arsenal, Kanu scored a stunning brace for the club. The first came 45 minutes in to give the Gunners a three goal lead; Overmars received the ball out wide and immediately crossed it along the ground into the box where Kanu was waiting. Always waiting. The striker turned his body slightly away from the defender shadowing him, before controlling the ball with his first touch and coolly finishing with his second.

The second goal was a work of art.

This time Dixon fed the ball into the box where Kanu was hovering. The Nigerian then proceeded to backheel the ball across the face of the goal and into the net. The goal was so instinctual, he barely looked in the direction of the goal and even the ‘Boro fans couldn’t help but applaud the extraordinary piece of skill they’d just witnessed.

Another fine example of Kanu’s special skill with the ball was his goal against Tottenham Hotspur in ’99. This goal really put him on the map because there are few Arsenal players the fans love more than the ones who score against our north London rivals.

Patrick Vieira received a free kick quite far out of Spurs’ area in the 85th minute. The Frenchman’s delivery was perfect and the ball landed right at the feet of Kanu, who proceeded to twist and chip the ball over Luke Young and neatly slot it home. The striker’s body language is so calm – almost nonchalant – and his style so languid, that you’d almost be forgiven for thinking he didn’t care, but his finish said otherwise.

Arsenal ended up winning 3-1 at White Hart Lane that day.

Kanu’s Chelsea hat-trick will also go down in Arsenal history.

Arsenal were 2-0 down at Stamford Bridge on 23rd October 1999 and as the clock ticked down into the final quarter, the feeling we could get anything from the tie had all but diminished. Chelsea were running the show and, after the Blues had failed to concede any Premier League goals that season on their turf, the idea that we could make a comeback was beyond unlikely.

However, no one told this to Kanu. The first goal of his hat-trick came in the 75th minute. Ray Parlour picked up the ball and passed out wide to Lee Dixon, who attempted to pass into the area, only to have the ball rebound back out. The ball landed at the feet of Marc Overmars, who slotted a pass through to Kanu in the middle of the area. The lanky Nigerian managed to stretch a long leg out to the wayward ball and poke it safely into the Chelsea net.

The second came just eight minutes later. In a similar movement to the first, Kanu passed the ball out wide to Overmars, and then another rebound brought the ball to Dixon. He then slid the ball back to Overmars who passed it back to Kanu – as always – in the centre who slotted it home once again.

The third goal was something special. It came in stoppage time and started from an almost clumsy interception by Overmars near the halfway line. The ball was then passed to Kanu out left who dribbled past player after player, all the way up to the by-line, drawing the goalkeeper out of position. Kanu then scored a curling stunner of a goal at a simply impossible angle. The strength and skill to not only dribble up the pitch that far without being dispossessed, but the precision to score from where he was on the pitch took something special. A truly magical goal that will give any Arsenal fan butterflies to re-watch.

When Kanu left Arsenal in 2004, he proceeded to play for West Bromwich Albion and later Portsmouth until 2012. He continued scoring and doing what he loved right up until he retired.

Now, he runs his own heart foundation, which deals with underprivileged children in Africa who suffer from heart problems, something Kanu had surgery for himself in 2014.

Although all Arsenal fans, past and present, will know about the stunning Chelsea hat-trick, many still won’t remember the striker’s other essential goals. His poaching, skill on the ball and unreal ability. Kanu has become a bit of a cult hero in fact, known for being a decent enough Arsenal player by most, but with only some recognising what a special player he was for the club. 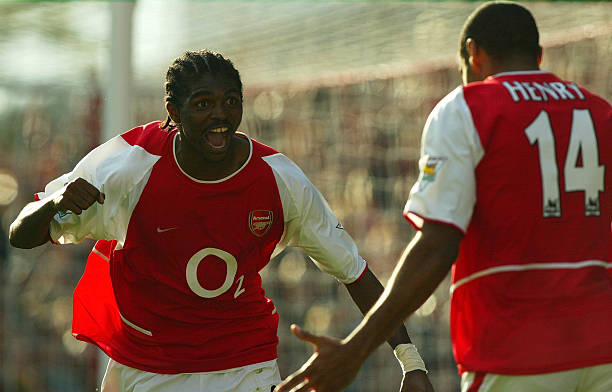 The phrase ‘super sub’ seems lacking when it comes to describing Kanu’s contribution on the pitch. The act of coming off the bench, still relatively cold without having had 80 minutes to gauge the feel of the pitch, the true speed of the game, the players who were lagging and the spaces he needed to get into. Kanu just had to throw himself into the game, give his all and try to, in many cases, grab a winner or equaliser with the untold pressure of the clock ticking down.

Most of his goals were scored late on with the opposition aware he was capable of scoring goals out of nothing in the dying minutes probably better than Arsenal.

Outside of Arsenal, again, Kanu was rated but not that highly so. Overshadowed by a tremendously strong Arsenal team, his name was rarely heard over the din of other legends and it’s a shame, because he deserved to be a legend too.

Kanu was everything you want in a player: tenacious, brave, skilled and a little bit cheeky.

It’s for this reason, that he’s one of Arsenal’s unsung heroes.