Joe Montemurro’s small squad policy was heavily criticised by some Arsenal fans following the 4-1 home defeat to Chelsea so I thought it would be interesting to look at how the big 3 teams are managing their players’ load and how they do the squad rotation.

I have collected data for the three teams via various sources with reliability for women’s stats a problem as usual.

So far this season, Arsenal have played 23 games, City 22 games due to one less Conti Cup group stage game, while Chelsea have played only 18. They have not played the Champions League this season and have a game in hand due to their Everton away game that was postponed.

With those numbers in mind, you would certainly expect Arsenal players to lead in terms of minutes played on the pitch ahead of City and Chelsea.

It makes sense as they have played four and five less games than City and Arsenal respectively.

The top four are all City’s and before Arsenal’s Danielle van de Donk shows up in fifth place. She has played the equivalent of a game and half less than City’s fourth most-used player and two-and-a-half games less than leader, Steph Houghton. 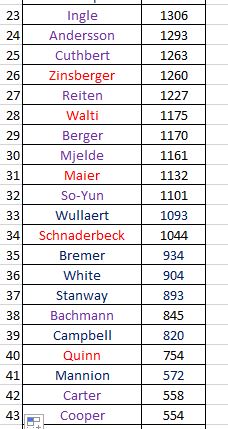 The final third of the table sees players who have limited game time, squad players used in rotation when the starters are rested, as well as the up and coming youngsters.

You also find in this list players who have been injured for a while and are coming back as well as any January transfer window signings. 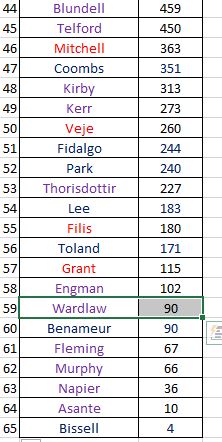 Now, if we look at the load spread by minutes inside the squads, the picture is different.

Joe Montemurro is doing a good job there, as far as I am concerned.

Danielle van de Donk only appears in 10th position and she has played 82% of the available game time meaning she has more or less missed one game in five so far.

That percentage is way below the four city players who have played 93 to 98% of their available playing time or the Chelsea three who are around 89%.

Arsenal place seven players in the top 22 ranked by playing time percentage, City have eight and Chelsea have seven. Quite balanced numbers overall.

The Gunners have eight players in the middle ranking, the same as Chelsea and while City have seven. The top end of that list consists of starters for the big games that get rotated for others, hence a percentage to goes into the 60s to 70s. This is valid, mainly for Chelsea and Arsenal players.

And in the final third of the table, we have the rotation and fringe players who get little playing time. They are, more often than not, players returning from injury, youngsters or new signings. 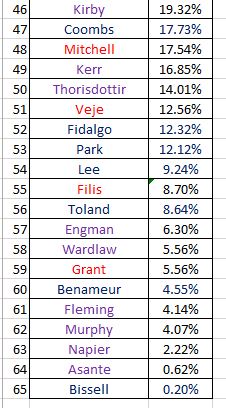 If I can sum up the way the three managers are spreading the minutes in their squad:

Emma Hayes’ players at Chelsea have played a lot fewer minutes than everyone else overall. She has used 25 players so far and has rotated most players except for England, Eriksson and Bright. Ingle, Andersson and Cuthbert have played 10% fewer minutes than the top three and Reiten, who is next in the rankings, has been rested in one out of four games.

Without the energy sapping Champions League, Hayes can manage playing time very well and can even account for injuries that happen, without impacting the performance level as the Blues are unbeaten so far.

Nick Cushing’s players’ have played a lot of minutes and his top six are top heavy in terms of time spent on the pitch: Houghton, Roebuck, Bonner, Weir, Becky and Walsh have been virtually ever-present. Walsh, of course, had a three game ban that allowed her to rest a bit. You can also see that City have rested Scott and Stokes a few times, while Hemp, Bremer, Wullaert, White and Stanway have shared the playing time in attacking positions.

For the Arsenal, Joe Montemurro has spread the load as much as possible with injuries disrupting the flow. Van de Donk, Evans, Little, Williamson, Miedema, Mead and Roord are the most-used players as they can be considered as starters.

Then you have six players who are starters most of the time but also rested if needed: Nobbs, McCabe, Beattie, Zinsberger, Waelti, Maier and Schnaderbeck. The remainder are fringe players really although that status can change due to injuries as seen in recent games with Louise Quinn who has played far more recently.

So, Joe Montemurro is doing a good job spreading minutes between the players, trying to keep them fresh for the big games coming in February and March.

With the transfer window closed, it is a pity that more players weren’t signed, particularly in defense as Tabea Kemme and Emma Mitchell have not been replaced.