Here are the latest disciplinary updates from the FA website with some well-known names among the leaders.

All data is provided by the FA WSL website.

Please also note this data is not 100% reliable. The FA website has Andria Georgiou on four yellow cards, for example, but she served a suspension for yellow-card accumulation last Sunday:

Five players have been red carded so far this season, which is about 0.07 red card per game.

Reading lead the way with two sendings-off ahead of Liverpool, Man United and Man City.

Five players also red carded in the FA WC, same ration around 0.07 per game. Five different teams, so no clear leader in that category.

Lauren James leads the pack and has already served a ban. Reading have two players serving a suspension with the FA WSL website incorrect regarding Jade Moore. 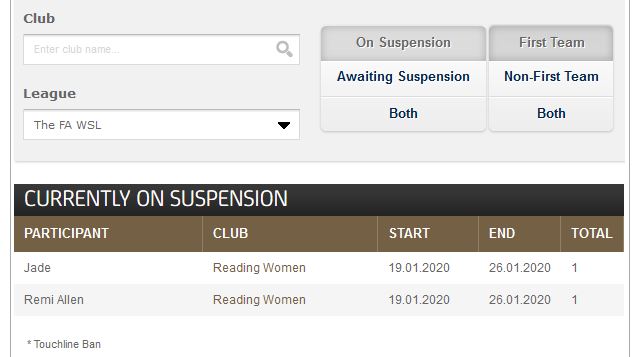 As far as the top number of bookings ranking is concerned, Man United and Tottenham lead with four players while Reading, Brighton and West Ham have three.

Lily Maple from Charlton will serve a ban next weekend, again, this is not reflected on the FA WSL website: 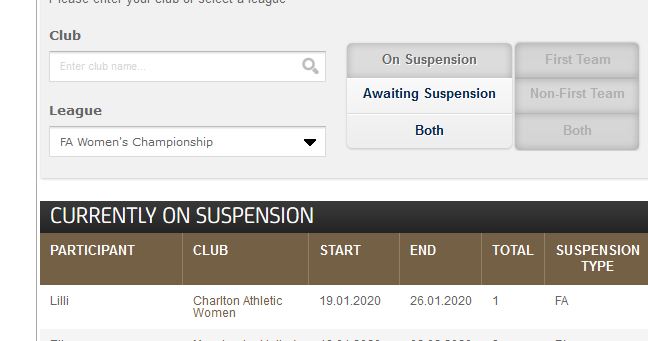 For the championship sides’ players in the top ten bookings list, there are three clear leaders – Crystal Palace, who are way ahead of everyone else, Durham and Leicester.

If you look at the names at the top of the rankings in term of yellow cards, they seem consistent with the teams who employ and aggressive style of play (in FA WSL). I would not be able to pass judgement on teams in the FA WC considering I don’t watch those games regularly.

We all know that refereeing in the FA WSL and FA WC is lenient, as referees seem reluctant to give yellow and red cards in general.

Law 12 is rarely applied as it is written. This is probably because many games would end up with one or more red cards and a dozen yellow.

I would actually welcome a game that ended like that because it would force players to shift their mentality.

If they were consistently penalised for their fouls and booked appropriately, they would leave their team short through suspension and over the long-term, that would help the football flow while making it more entertaining as well.