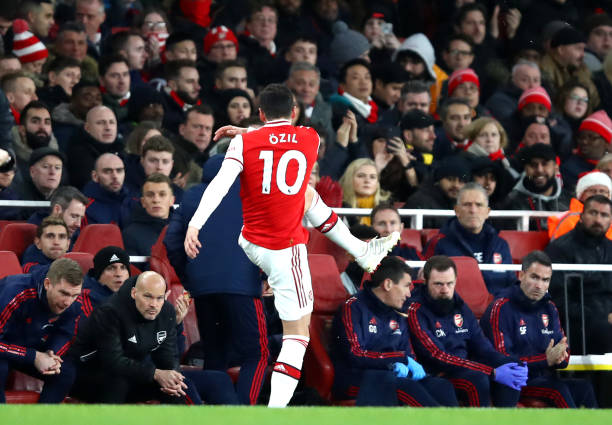 Before the game on Saturday, Freddie Ljungberg said he wouldn’t have picked Mesut Özil to travel to the Everton match even if the German had been fit and then gave a more detailed explanation after the 0-0 draw.

In Ljungberg’s final game in charge as interim head coach, he made the decision to leave Mesut Özil behind. Arsenal issued an update before the game confirming a ‘right foot’ injury for the player, and many assumed that was why he didn’t travel.

Ljungberg confirmed the injury but went on to suggest Özil wasn’t going to travel either way.

“Mesut wouldn’t have been in the squad anyway given what happened in the last game.,” Ljungberg explained before the game.

After the 0-0 draw at Goodison Park, Ljungberg was asked about it again.

“For me, I got asked after the game about Mesut,” Ljungberg said. “He walked off the pitch [in the Man City game] and then kicked his gloves. The fans were not happy.

“I got asked about it and said, ‘At Arsenal, that’s not how we behave and not what we do’.

“I stand by that. Mesut was injured but I would not have picked him for the squad because I want to make a stance that it’s not what I accept from an Arsenal football player.

“That’s my decision. I won’t make the decisions again but that’s what I think.”

Özil didn’t cover himself in glory last weekend. He didn’t play well, and as mentioned, he reacted angrily to his substitution. It wasn’t the first poor performance from him in recent weeks, either.

The problem isn’t that his showings lack quality. It just seems like he’s giving up well before he needs to. So many moves would have gone better if he’d made the extra run into space or pressed one more opponent.

The frustrating thing is, I saw him trying his best in the draw against Southampton in late November. It didn’t work out that day, mostly thanks to his teammates, but he was really trying and you could see the difference it made.

Again, after Martinelli’s goal against West Ham, he came back to life. He got involved in both of the next two goals and looked at his best.

Clearly, he isn’t happy with how things are going for Arsenal. None of us are. But he needs to play like that consistently if the team are going to achieve anything with him.

Ljungberg says the reason for leaving Özil out was the show of dissent after the substitution, but his performances need to improve too.