On Sunday night there was uproar across the footballing world because a Cameroon player spat at an England one but less was said about the tackle on Steph Houghton that could have left her like Abou Diaby, so what’s that about? 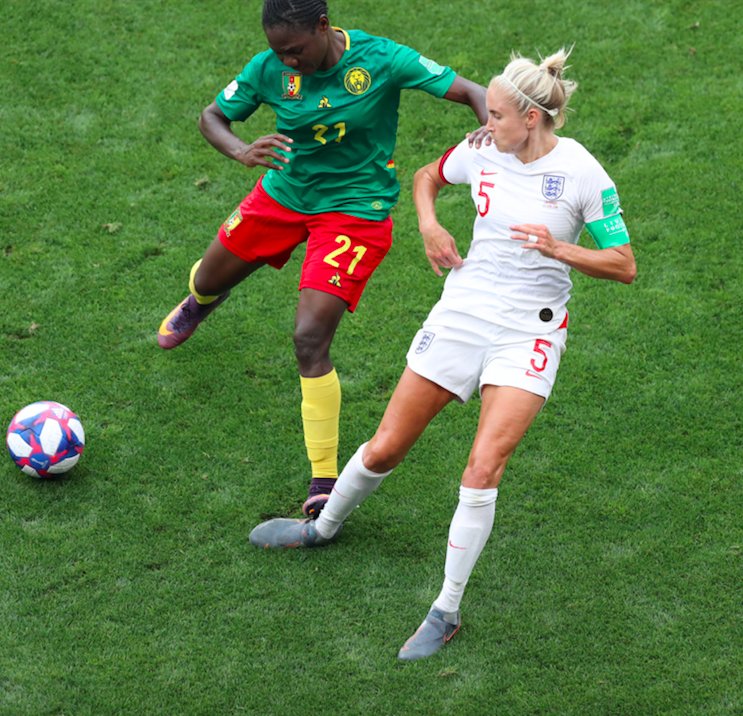 Spitting is an act that speaks to our lizard brain as some sort of threat above and beyond the actual reality of being spat upon in an era of antibiotics.

It’s not pleasant and if that’s your default response to something not to your liking, then you should perhaps seek help. But would I have preferred the man who spat at me to have snapped my leg like a twig instead? One action required me to wash myself, the other a year’s worth of rehabilitation.

Yet breaking a leg on a football pitch is only punishable with a three-game ban, if you get punished at all what with most not being that kind of player. Arthur Masuaku was banned for six for spitting. In case you aren’t good at maths, that’s the same number of games as Ryan Shawcross, Martin Tyler, and Dan Smith received COMBINED for breaking the legs of Aaron Ramsey, Eduardo, and Abou Diaby. None of those three could simply wipe away their opponent’s ‘disrespect’ and get on with their careers in the same way as Masuaku’s ‘victim’ could with his saliva.

Of course, some will say that having your leg broken is a risk you take when playing football while being spat upon should not be. But that’s a ridiculous argument.

In the world of football, there is no greater sin than that of disrespect.

Refuse to shake a manager or player’s hand and you’re the subject of page after page of journos crying about the lack of respect in the game. Break a fellow player’s leg, however, and we all know that you’re not really that kind of player.

Yes, leg breaks happen and many times they are accidental. But I’m not buying that fellow professionals are required to take more care with their bodily fluids than they are with flying limbs that can inflict permanent and lasting damage.

Give Abou Diaby a call. Ask him if he’d rather have been spat at when he was 19 or had his career ruined for absolutely no reason other than his opponent gave no shits about his safety. A player, it should be noted, who served not one second of a ban.

I’ve seen tackles that would make you vomit elicit significantly less outrage than a player cursing or giving the finger or spitting at an opponent or refusing to shake a hand.

Yet we all know which one garners to most column inches….just ask Eduardo if you still aren’t sure.

Did his leg break or dive cause a bigger uproar?

Episode 291: Arsenal’s questions for the summer

Will Arteta turn things around at Arsenal next season?