When an international tournament appears on the horizon, the lack of opportunities for English players due to the rising number of foreigners becomes a trendy topic again.

Let’s have a look at the numbers and see if the trend is changing or if the Barclays FA WSL is starting to look like the Barclays Premier League in that respect.

There is absolutely no doubt that over time, the number of foreign players has grown a lot.

The numbers have been steadily increasing over the last nine seasons from 35 in 2011 to 99 today. We also have to take into account that the number of teams involved has also steadily increased from eight to eleven.

There has been a constant year-on-year increase, except for two seasons (2014 and 2017) when numbers dropped.

In terms of percentage of overall players, the first four years saw the percentage remain in the 20 to 30% range. The last five years have seen the numbers rise to between 30 to 40%.

Phil Neville still has a good pool of players to chose from compared to Gareth Southgate.

In a year when Brexit is (supposed to be) happening, it is funny to note that the number of EU/EEA players is nearly level with the number of non-English GBI players (41 to 47), while in the first season it was 2 to 30.

It looks like many players have benefited from the EU’s Freedom Of Movement, something Theresa May is fighting hard to get rid of.

You do wonder what rules the FA will implement once Brexit has gone through. Remember the old times when United were struggling in the Champions Cup due to the UEFA limit of two foreigners?

You can imagine the damage if the FA forbids FA WSL sides from having more than three or four non-English players.

On the positive side, it would certainly give an opening to English players at certain clubs as seen in the table below. 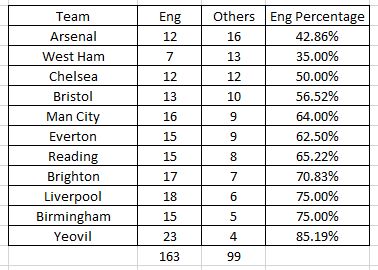 Arsenal have the most foreign players in an FA WSL team. They are followed by West Ham and Chelsea.

I don’t think it is a coincidence that the top three teams are London clubs as London is a city open to the world. Those teams also have big enough budgets to recruit many foreign players.

At the opposite end of the table, Yeovil only have four non-English players while Birmingham have five. Those two teams are known to offer opportunities to English players.

Manchester City, as one of the big three teams, has gone for the option of having fewer foreign players than the other two teams. This is often reflected in Phil Neville’s squads.

In Arsenal’s defence, it has to be said that the majority of the foreign players recruited are all internationals with most of them genuine quality. For example, the signing of Lia Wälti from Switzerland, signed last Summer for the defensive midfield position to improve on Dominique Bloodworth.

Could Arsenal have found an English equivalent in terms of quality? Keira Walsh, no doubt but City would not have sold her to us.

Fara Williams? She left us after performing badly due to personal problems.

Jade Moore who also plays for Reading? I don’t think she is a good as Lia Wälti.

To be fair, Arsenal have produced excellent football, managed to return to the Champions League and are now favorites to win the title with many foreign players in their side but have also managed to give first-team opportunities to eight Academy players this season.

The 2019/20 season will be interesting should Brexit happen as those foreign players’ numbers might tumble under new regulations.

Arsenal hammer Manchester City to go top of the league

Arsenal to bid for Noa Lang after £25m transfer decision