I don’t often find myself agreeing with the Daily Mail’s Martin Samuel but in his editorial in Tuesday’s paper he hits the nail on the head – would any other top club allow their CEO to prevaricate for so long like Arsenal have with Ivan Gazidis?

Indecision was a hallmark of Arsene Wenger’s Arsenal and we were led to believe that it was the Frenchman who had the problem making decisions. However, we’ve now had Gazidis deliberating a move to Italy for a number of months and nobody seems to be pushing him to make a decision.

It was a surprise to hear that Gazidis was linked with a move away given how long he craved power at the Emirates. To leave when he finally got his hands on it seemed a bit strange until you realised that the only loyalty most CEOs have is to their own bank balance.

Whose head wouldn’t be turned by the promise of an extra £1m-a-year (or double your salary, depending on where you do your reading)? Add in Gazidis’ friendship with Paul Singer, a key part of Elliott management who recently took over the Italian club, and things become slightly clearer.

However, despite AC Milan chasing him all summer, and Gazidis clearly being interested in the role, no decision has made one way or the other. 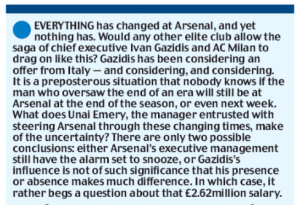 “Everything has changed at Arsenal, and yet nothing has,” Samuel writes.

“Would any other elite club allow the saga of chief executive Ivan Gazidis and AC Milan to drag on like this? Gazidis has been considering an offer from Italy — and considering, and considering.

“It is a preposterous situation that nobody knows if the man who oversaw the end of an era will still be at Arsenal at the end of the season, or even next week. What does Unai Emery, the manager entrusted with steering Arsenal through these changing times, make of the uncertainty?

“There are only two possible conclusions: either Arsenal’s executive management still have the alarm set to snooze, or Gazidis’s influence is not of such significance that his presence or absence makes much difference. In which case, it rather begs a question about that £2.62million salary.”

Reports elsewhere on Tuesday claim that Gazidis is now more likely to stay with Arsenal although he still had not made a decision either way at the weekend. These follow more reports from Italy claiming that the Italians are fed up waiting for him.

Gazidis, for his part, is said to be either seeking assurances over available funds or trying to negotiate the best deal possible for himself:

Ivan Gazidis is demanding an expensive ‘golden parachute’ clause to be granted in his contract with AC Milan & that’s why he is yet to sign. Elliott will make a decision on his request/appointment by the end of September [via Sole24Ore’s @carlopaolofesta] pic.twitter.com/a98mHEvqjr

When the Islington Gazette spoke to him after Arsenal Women’s 5-0 thrashing of Liverpool on Sunday, he refused to speak about the rumours.

If he was staying, he could have simply said that and put an end to all the speculation.