It’s a bad time to be an Arsenal fan when even the club’s sponsors have started trolling us.

Arsenal’s sponsors SportPesa, who extended their partnership with the club in August 2016, were all over Twitter during the 3-0 defeat to Manchester City on Thursday night. 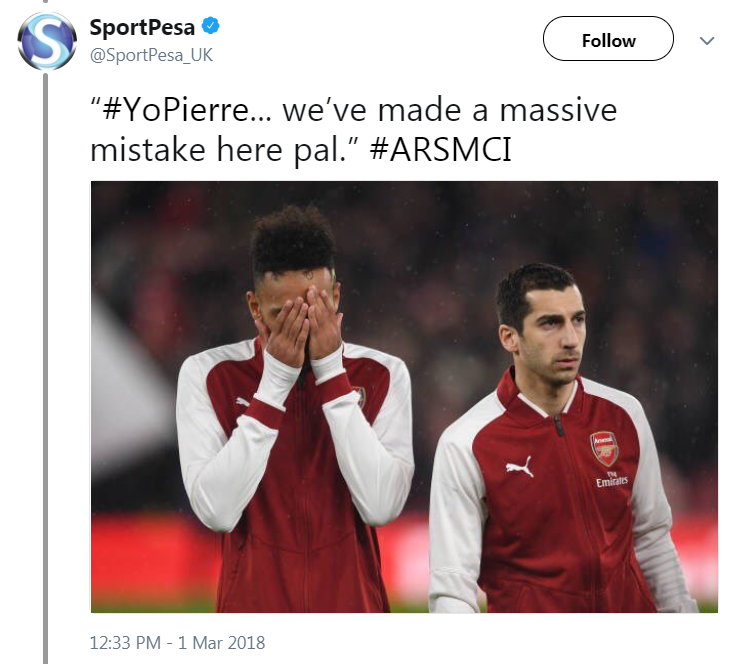 The betting company ended up trolling Arsenal by insinuating that Henrikh Mkhitaryan and Pierre-Emerick Aubameyang are regretting their moves to north London. This was presumably after the striker missed his penalty. Although how that was directly Arsenal’s fault is beyond me.

While we do seem to live in a world where brands, clubs and companies feel comfortable engaging in a bit of banter with others, I do think a line should be drawn when it comes to professional working relationships. But that’s just me.

There’s a difference between Bayern Munich’s Twitter account repeatedly trolling Arsenal over their 10-2 aggregate win against Arsenal in the Champions League last term. It’s another for a company that actively works with Arsenal to join in with the jokes during the club’s second 3-0 defeat to the same team in five days.

On the other hand, everyone else and their mothers are making fun of us, SportPesa might as well get involved as well. At least we’re making others laugh…

Lacazette: It’s never easy to be on the bench

As 6 Arsenal games are moved, BT Sport to be sold...

Arsenal among 18 PL teams to vote against owner-funded sponsors