Supposed screen grabs of Östersunds FK tweeting ‘COYS’ during Spurs’ 2-2 draw against Juventus on Tuesday evening are currently doing the rounds, but did the small Swedish team actually troll Arsenal this hard?

Earlier in the week, Östersunds FK demonstrated their sense of humour when they shared a post of their ‘dressing room’ on social media. The ‘dressing room’ being the inside of an igloo. Although, given the freezing, snowy conditions over there are the moment, some Arsenal fans actually took the post seriously. 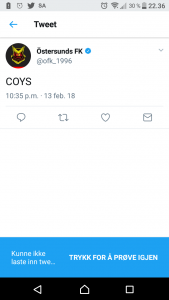 On Tuesday night, the Allsvenskan side allegedly tweeted ‘COYS’ in support of Tottenham during their 2-2 draw against Juve but immediately deleted it.

You would assume that Östersunds FK trolling Arsenal to such a degree would have caught more attention, even if they did delete it seconds later, which makes me sceptical that they actually did.

If you’re going to tweet it in the first place, why suddenly delete it? It wasn’t offensive, it was just banter…

Plus, would a Swedish team really tweet ‘COYS’ for ‘Come on you Spurs’?

Who knows? But, for the moment, I’m going to assume the tweet didn’t happen and the screen grabs are probably fake until proven otherwise.