Arsenal have halved their 2018 calendar price and this is apparently to do with the Gunners selling players.

Arsenal have reduced their 2018 calendar from £10 to £5, which is a pretty normal thing to do considering it’s now February. 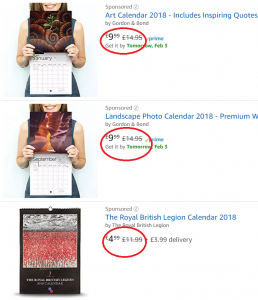 If you take one look at Amazon, you’ll see that almost all sellers do this because people are far less likely to buy a yearly calendar when you’re a month in to that new year.

In fact, smart people wait until January is underway to pick up reduced-priced calendars and diaries every year instead of paying stupid prices a few days or weeks earlier. 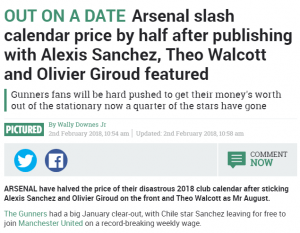 However, the S*n have somehow made this about the Gunners calendar being ‘disastrous’ because they’ve sold three of the players featured in the 2018 edition.

In January, the Gunners allowed Alexis Sanchez to strop off to Manchester United, Olivier Giroud to sign for Chelsea and Theo Walcott to move to Everton.

Alexis is January on the calendar – maybe because the club knew he wouldn’t be staying past the transfer window – Theo is August and Giroud is December. 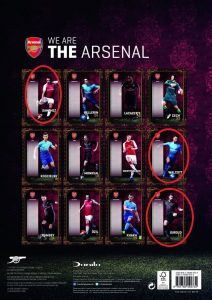 Back when Arsenal’s calendar was first released, the team at Daily Cannon Towers half-thought Mesut Ozil had been used as October’s picture because he was staying, but we were clinging to any sign back then that he would re-sign.

Now, even though the 29-year-old is actually staying, it seems clear there is no real thought process behind which months the players represent, unless Arsene Wenger really didn’t think Theo and Giroud were not going to leave in this window or the next.

Even if he did, I doubt he discussed it with the people who design the calendar.

Nor do I think anyone at the club thought about the calendar when the signings were completed.

Nobody except the S*n, that is.