On the verge of a Manchester United move, Alexis Sanchez retweeted a Daily Mail article calling the deal a “bargain” for the Red Devils and denying the Chilean is a mercenary.

At this point, the cat is pretty much out of the bag with the Sanchez-to-United move.

At least, the 29-year-old himself clearly thinks so, as he’s decided he’s free to post on social media about his new club and it appears he might be letting the criticism regarding his mega-salary get to him.

First, the former Barcelona man posted a video on Instagram of him boarding a plane. The most common theory is he’s off to Manchester for a medical. Although if he was driving up yesterday, as Arsene Wenger claimed, that doesn’t make much sense.

Since it’s snowing in the video, that suggests he filmed it today. Perhaps Wenger was bending the truth a little, and he just left Sanchez out of the squad against Palace.

After that, Sanchez retweeted the Daily Mail article on his official Twitter account, as you can see below (we took a screenshot in case he thinks better of his actions later): 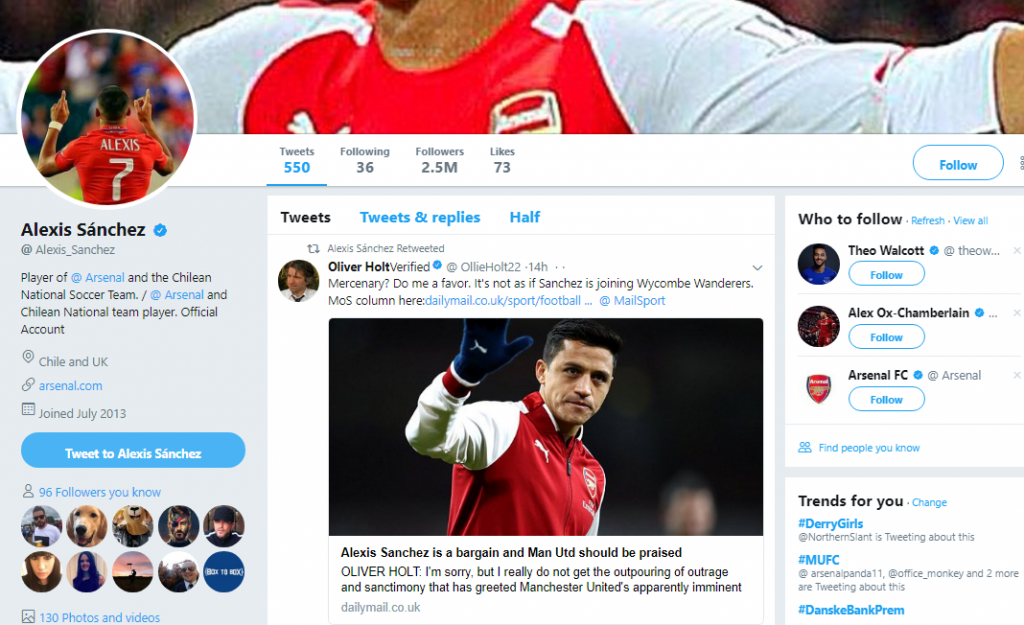 In the article, Holt argues against Martin Keown’s claim that Alexis is a mercenary.

He points out that choosing Manchester United over City isn’t the same as moving to China or Wycombe Wanderers.

The Mail writer also points out that United need a player like Sanchez, so he could be a good fit.

Perhaps all the talk is getting to the Arsenal forward, if he feels the need to publicly defend himself.

Whatever the reasoning, hopefully the deal is over the line as soon as possible so we can move on and he can be United’s problem instead of Arsenal’s.