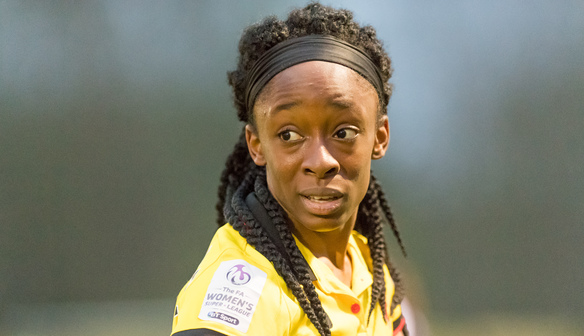 Watford Ladies striker Adekite Fatuga-Dada revealed her delight to score her first goal for the club in their first win of the season, and is hoping they can now build up some momentum – in an exclusive interview with the Daily Cannon.

Fatuga-Dada scored the winning goal for Watford to beat Millwall in the Continental Tyres Cup, her first for the club in a competitive game. She admitted to the Watford Observer that it was an emotional time to finally get off the mark.

“To get my first competitive Watford goal in a game like that is amazing for me. I was a bit emotional at the end of the game but the win means a lot to us.”

The former Arsenal forward told the Daily Cannon what she made of Watford’s performance in the game and how she thinks the side have fared in the WSL 2 this season.

What did you make of your side’s performance against Millwall?

“I thought we played really well in the game last night. We dominated for the most part and I think we showed a lot of desire and hunger to get the three points.

When you score your first #watfordfc goal 💪

“We weren’t getting the luck earlier on in the game, but thankfully we did end up getting the goal I think we deserved.”

How would you describe the start made by Watford this season?

“Probably safe to say it hasn’t been a great start for us but we’re still quite a new team.

“A lot of new and experienced faces have come in, as well as some younger ones, so we’re still getting to know each other.

“I think last night showed exactly what we’re capable of.

“It’s a long season so we’ll be looking forward from this point instead of looking back.”

And finally, where did you love for football manifest?

“My love of football was passed on to me through my uncle! He was always taking me down to the park teaching me how to kick a ball and used to sit me down to watch games.

“My love of the game was definitely down to him. I was scouted to the Watford centre of excellence at the time through the Watford Trust safer neighbourhoods’ programme.

“I used to go down after school and play with the boys and I’d be one of the better kids there even though I was a girl.

“I’ve grown up a Manchester United supporter so my idol I would say was Cristiano Ronaldo. In the Women’s game, my idol had to be Kelly Smith, without a doubt.”

Thanks to Adekite Fatuga-Dada for speaking with us at the Daily Cannon. We wish her and Watford all the best in the WSL 2 this season.

The side currently sit at the wrong end of the table, but there’s plenty of games remaining. And given they’ve recently ended their barren start to the campaign, things should improve in the coming weeks.