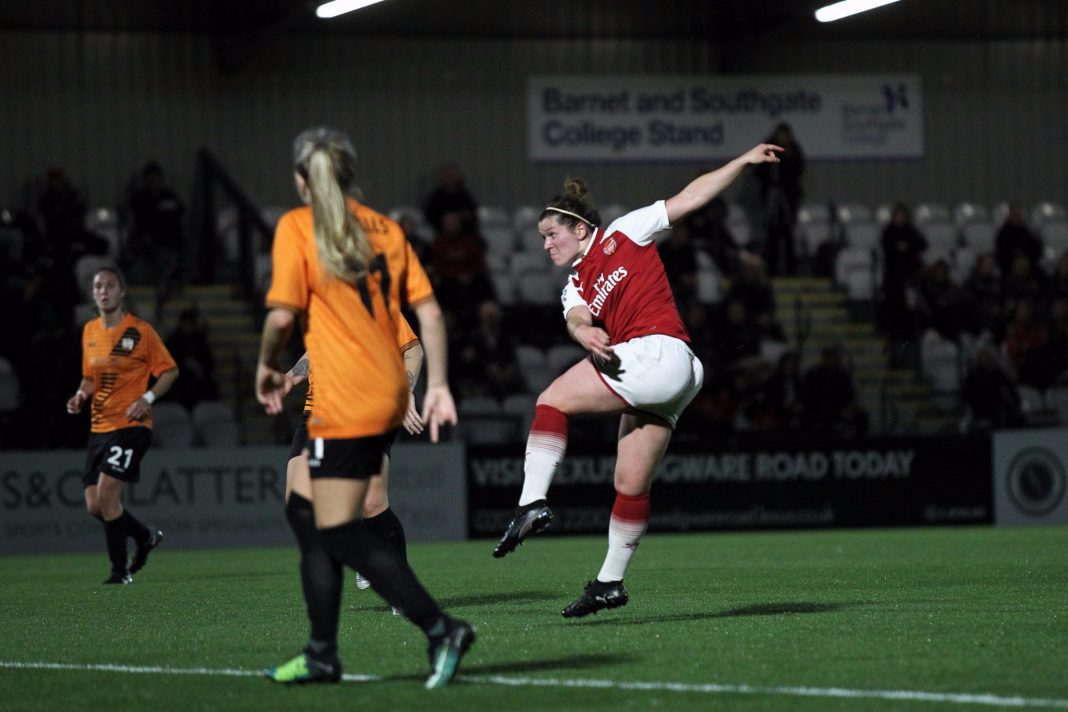 They are now top of Group one south level on points with Watford Ladies but a better goal difference.

Pedro Losa paid respect to London Bees by putting out a strong side for the game with only one youngster involved and all but two senior players in the squad. There was no space on the bench for the Development team players as the manager went for the jugular and a well needed boost and big win following two bad results in the League.

The result was never in doubt and it was an attacking firework with left-back, and current top scorer, Emma Mitchell scoring a brace. Beth Mead scored two penalties while Jodie Taylor, Louise Quinn and Lisa Evans were also on the scoresheet.

Pedro Losa gave playing time to all the players that had had fewer opportunities since the beginning of the season and therefore used the 3-4-3 system rather than the usual 4-3-3 as follows – Moorhouse; Rose, Quinn, Williamson; Scott, Nobbs, Janssen, Mitchell; Evans, Miedema, Mead.

He made a double half-time substitution with Taylor for Miedema and a debut for Taylor Hinds for Mitchell. O’Reilly also came on late for Scott.

Overall, it was a well deserved win for the Gunners against a WSL2 side that gave a very good account of themselves. There were many fluid movements in attack compared to the Bristol game, with the wingers like Mead and Evans running at the Bees defenders, helped by the wing backs, Scott and Mitchell. The defene also kept a clean sheet, so it was a fun game and feelgood performance overall.

There is no doubt that with a negative spiral for the team in the league, the manager and players were probably under a lot of pressure to get a result. Therefore, it was a missed opportunity to play some of the youngsters to bed them in and prepare them for the first team.

At the end of the day, rather than throwing them in at the deep end like in the 2015 season, if injuries happen, Pedro Losa could have phased them in.

But with a big squad of 22 first team players, he probably thinks that he won’t need any of the talented Development team players in 2017/18.

We will see if he gives youth a chance against Watford and Millwall or if he sticks to his senior player rotation policy as a trophy is a must this season.