Tony Pulis has confirmed that former Manchester United defender, Jonny Evans, had the chance to sign for Arsenal last year.

Manchester City have bid £18m for Evans this summer but West Brom want Guardiola’s side to up that offer before they consider selling the 29-year-old – a move from their original stance that the Northern Irish man was not for sale.

But it is less this that caught my attention than the confirmation that Arsenal did indeed try to buy Evans last year.

“He had a chance to go to Arsenal last year,” Pulis said, as reported by the Daily Mail in their Saturday edition. “It didn’t affect him in any way.

“You could say Manchester City are different because they will be hoping to win the title, the Champions league, and the FA Cup. It is difficult. 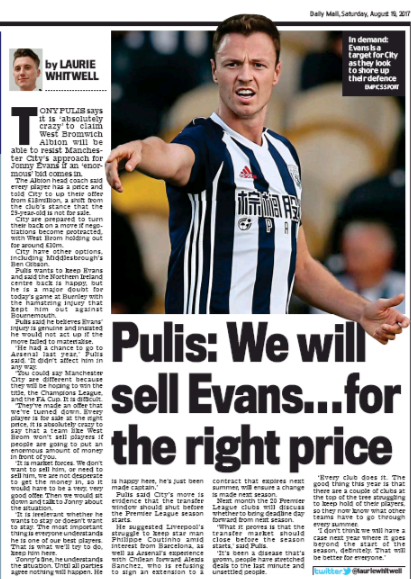 “They’ve made an offer that we’ve turned down. Every player is for sale at the right price, it is absolutely crazy to say that a team like West Brom won’t sell players if people are going to put an enormous amount of money in front of you.

“It is market forces. We don’t want to sell him, or need to sell him, we are not desperate to get the money in, so it would have to be a very, very good offer. Then we would sit down and talk to Jonny about the situation.

“It is irrelevant whether he wants to stay or doesn’t want to stay. The most important thing is everyone understands he is one of our best players. That is what we’ll try to do, keep him here.

“Jonny’s fine, he understands the situation. Until all parties agree nothing will happen. He is happy here, he’s just been made captain.”

In the Daily Star, his comments were reported as, “Arsenal made an offer for him last year. Leicester did last year and have again this summer, and it hasn’t affected him.”

Evans is a major doubt for West Brom’s game against Burnley as he struggles with a hamstring problem.

Last summer, Arsenal purchased Rob Holding from Bolton for £2m but it’s not clear if he was purchased instead of Evans or if Holding would have been signed regardless. Given the age of Evans, you would hope it was the latter.

With the sale of Gabriel to Valencia this week (who has a crazy release clause), Arsenal will certainly be in the market for another central defender. Unless, of course, they decide to give Calum Chmbers another chance.