Arsenal Women will see four of their players compete for the trophy on Sunday when the Netherlands meet Danemark.

The Netherlands beat England 3-0 thanks to Arsenal’s Anna Miedema’s opener from a brilliant Jackie Groenen cross. The second Dutch goal was 100% Gunner, as Fara Williams intended headed backpass went straight to Danielle Van De Donk, who finished with ease. The third was an own goal from Millie Bright in injury time, when she diverted a Lieke Martens cross past Siobhan Chamberlain.

Overall, it was a deserved win for the Netherlands who played better football than England and created a bit more. Nevertheless, football is a sport of small margins and it has to be said that some decisions from the referee went the Netherlands’ way, especially one or two penalty shouts. 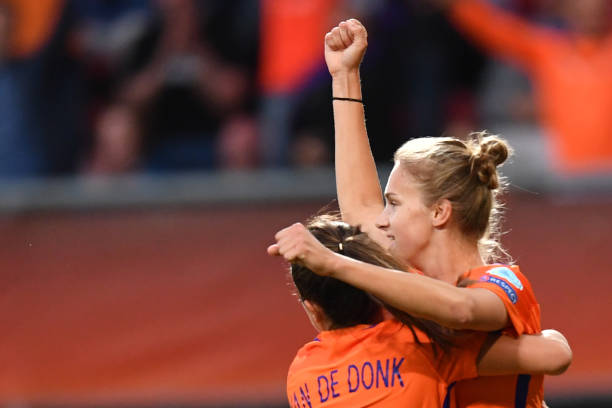 Clearly, England’s fitness level throughout the tournament was superb and that allowed them to defend superbly in earlier games while also pressing really high to disturb the opposition’s organisation and tactics.

But because the Netherlands matched them and managed to open the scoring, England faced a problem they never had to deal with so far – chasing a game.

Being extremely fit and organised is very useful, but it does not help with creativity and ball possession.

They were so well drilled in their main gameplan that switching to a more attacking and possession-based system did not happen.

Golden ball candidate, Jodie Taylor, missed her big chance – surprising considering she had been so clinical so far – and the whole England team was not clinical enough with the Netherlands making two goalline clearances.

So, small margins decided the game even though the final score said 3-0 to the Netherlands.