It was hard to know how to feel when we signed Seas Kolasinac.

On the one hand, he was voted the best left back in the Bundesliga last year. On the other, we already have two decent left backs, and he was free.

I know what you’re thinking: surely being free is a positive? In these heady days Kyle Walker is apparently worth £45m.

We have spent the last decade being told you get the quality you pay for. We’re told that Arsene has lost his touch for finding and capturing bargains. Without a price on his head, how are we supposed to know just how good our new left sided defender truly is? 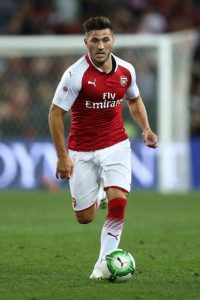 I’d never seen Kolasinac play before his arrival at Arsenal, but after two appearances against admittedly lower level opposition in Australia, I’m impressed.

He’s clearly comfortable playing on the left of a back three, where he was fielded in both games in Sydney, but he showed in his bursts forwards that he’s also excellent pushing towards the opposition goal as well. Perhaps that’s not surprising, given that most of us expected him to play as the left wing back rather than as one of the three, but his ability to play in both roles opens up significant options and versatility across an increasingly impressive looking backline.

More importantly though, he has been extremely proactive. Our new defensive formation encourages our men at the back to step up and make things happen, rather than jockey to give midfielders time to get back – it suits the players on our roster significantly better, and it’s why we improved when we switched to and mastered the three last season.

Kolasinac fits perfectly into this mould, stepping forward to make interceptions and get tight to opposition forwards, hassling and harrying them until he forces a turnover. We’re used to seeing that proactive touch-tight defending from Nacho Monreal, which in a back four sometimes left us exposed, but in a back three helps to win quick ball. It’s really promising to see our new signing slip so easily into that role, and gives us the option of playing one or both of them as desired, as both can easily play either wide or tucked in beside the central defender. 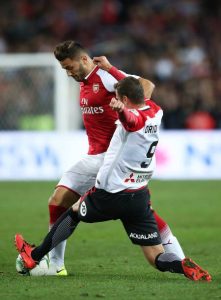 But with every Arsenal player, we also have to look at what they contribute to the team in the other direction too. Kolasinac is hardly a shrinking violet – he clearly has a level of strength and power which we’ve been lacking in recent years to bulldoze his way through opponents, but he also has some decent technical skills and footwork.

Critically, though, his pro-activity in defence is matched in attack. He was comfortable going beyond his wingback when they cut inside to create space, and he also moves on the front foot quickly with sharp, direct passing. Too often, we can be a little lethargic getting the ball forward from the back, but it was noticeable how Sead was keen to play first time passes to get our momentum going again.

It’s still early days, obviously, and much tougher tests will come in the weeks ahead defensively in particular, but the early signs are impressive from our new German-born Bosnian defender.