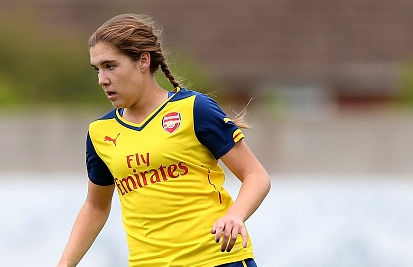 Chloe, like many defensive midfielders, doesn’t get the credit she deserves. Players with her profile are really rare, and the imblance in the Arsenal reserves side was attributed to a lack of defensive players on the pitch.

It was a problem last season and now the lack of opportunities with the Gunners has led to Brunton-Wilde leave the Development Team in search of first-team opportunities elsewhere.

How did the move come about?

“I used to play for Charlton’s youth academy when I was 13/14 and they developed me into the player I am. I know the chairman and a few of the players. I know they can offer me good facilities and help me develop more.
“They have a new manager who is great, he seems to have very similar intentions to what I do. He offered me a good deal I couldn’t refuse and im looking forward to the new journey.”
Chloe played four seasons in total for the club. Two with the Centre Of Excellence U17 team and two seasons with the Development Team.

What are your best memories?

“Obviously playing for Arsenal was a memory in itself ill never ever forget. The friendships I have made are amazing, the best group of girls I have ever met, and those friendships will remain.”
“Arsenal will always have a special place in my heart and have helped me to develop more than I could ever imagine. The best memory I have would probably be when we won out first FA cup under John Bayer with the U17’s which was my first year at Arsenal, where we beat Aston Villa 2-1.”
It is important to note not many players from the youth team end up making it to the first team. Out of the 18 players in the double-winning U17 squad, only three remain at the club – Anna Filbey, Anna Patten and Taylor Hinds.
All the other players have now moved on. It’s quite hard for the youngsters to make the step because of the large gap between the reserves and the first-team in term of pace and intensity.
Not many teenagers are ready to play senior football at such a high level at a young age. Only exceptional players like Leah Williamson, Gilly Flaherty, Rebecca Spencer and Gemma Davison were ready at 18 years of age or earlier.
Those who are developing well but at a normal rate like Chloe or Rianna Dean end up moving away because the club is not ready to take chances on youngsters to develop at their own pace. Arsenal have preferred to buy the finished product like Anna Miedema or Fara Williams.

“I don’t want to say too much about how Arsenal push there players up, from my point of view I feel they need to give more chances to youngsters, but then again look at the likes of Lotte ( Wubben-Moy) and Anna (Patten).. both very young getting a lot of game time.”
Pedro Losa gave Lotte and Anna their big break after a number of senior defenders were injured, and the pair took their chance to impress.He stuck with the young centre-backs as they were delivering on the pitch, and it shows with a bit of luck that young players can perform when called upon.

What positives do you take from your Arsenal career?

“Overall, Playing for Arsenal made me into a better person and a better footballer, would like to thank the girls and the majority of the coaches for everything.
“I know the friendships will remain and I am happy that were all moving onwards and upwards and I wish them all the best of luck with everything they do. It’s been an absolute pleasure.”
Hopefully Charlton will give Chloe a lot of opportunities to carry on growing, showcase her talent and get promoted to play in the FA WSL in the near future.