Mesut Özil and Granit Xhaka evidently didn’t read the script that Tuesday night’s home win over Sunderland was to be an end of season dead rubber played at walking pace by both sides.

For the opening 22 minutes, Özil was content to take a more peripheral role, operating from the shadows like an assassin waiting for his moment. Aaron Ramsey instead stepped in to the role of conspirator-in-chief, creating a glorious chance for Olivier Giroud. With 22 minutes on the clock, Arsenal had registered 10 shots and looked likely to break the deadlock. 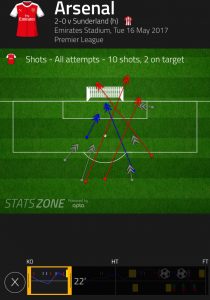 On another day, more accurate finishing or less assured goalkeeping from Jordan Pickford, would have seen Arsenal put the game to bed after 20 minutes and then settle down and play in 2nd gear, as they famously did in the 3-0 victory over Manchester United in October 2015. As it was, Arsenal were unable to build a lead before the game cooled off.

It would have been foolish for Arsenal to continue to play at as high a tempo, in a 4th game in 8 days, at the end of a gruelling season, with a cup final on the horizon. That withstanding, the face value of the extent to which they eased off having not broken the deadlock will have concerned some in attendance.

However, even if no player is operating at more than 60% of their capacity, some players’ base level is so high that their output remains on a different plane to what others can offer at their best.

Özil took control of the match, providing Arsenal’s play the technical security in the final third of the pitch that proved so crucial when the pace of the opening 20 minutes slowed down.

Having someone with Özil’s skillset in a match like Tuesday night’s was crucial to counterbalance the presence of Alexis Sanchez’s high risk high reward style not coming off and Giroud being well off his service-dependent game.

The German offered clarity and poise, injecting calm assurance into Arsenal’s passing play and preventing his teammates from getting too frenzied, over-committing, and getting caught on the break. 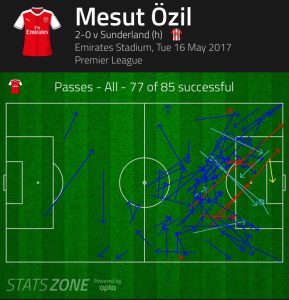 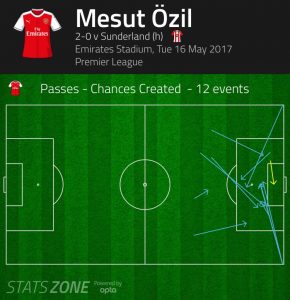 In addition to exuding calm for Arsenal, Özil also created chaos for the Sunderland defence, in the form of the unprecedented 12 chances he created.

He was quietly brilliant throughout and it’s no wonder that he was the pivotal figure when Arsenal eventually broke the deadlock. As a few in the crowd grew frustrated and started to lose their heads, Arsenal’s two left-footed schemers kept theirs.

As he played the ball square to Granit Xhaka, Özil subtly motioned with his hand and eyes that he intended to make a run behind Sunderland’s backline. The Swiss midfielder acknowledged this and clipped a perfectly lofted through ball for Özil to selflessly clip back across goal for Alexis to knock into an empty net.

While Özil provided Arsenal ball security and cutting edge in the final third, it was Xhaka who controlled the middle.

His range of passing throughout the match was superb.

He did all the simple stuff well, in addition to pulling off passes between the lines, crossfield switches, lofted diagonals, and more. Compare the active role Xhaka played in trying to break down a Sunderland side content to play on the back foot with his probing passing, to the passive and safe passing of Francis Coquelin against Leicester 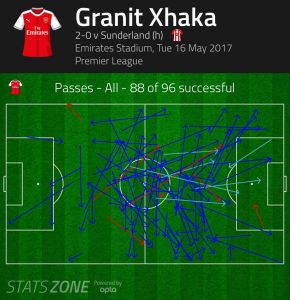 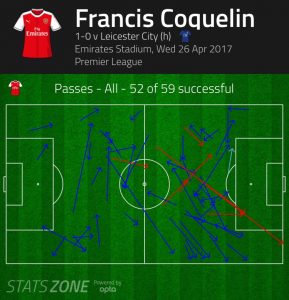 Xhaka still made a couple of basic errors regarding getting caught in possession, but his usage of the ball and performances over the past couple of months serve as a timely reminder of how high his ceiling is and what he can offer when focused, played alongside the right partner, and in a helpful set-up.

While the outcome of the FA Cup final remains in Arsenal’s hands, qualification for next season’s Champions League doesn’t.

In addition to needing to beat Everton themselves, Arsenal will be hoping that Liverpool slip up and drop points against an already relegated Middlesbrough.