The Mirror claims that Manchester City are chasing Danielle Carter and are ready to offer her big money – £80,000 per season.

Can Arsenal ladies stay unbeaten against Reading?
How Notts County Ladies folded and how it can be avoided again
FA look at putting English player quota + salary cap in FA WSL

It looks like the forward has only six months left in her contract and City are willing to pay a transfer fee during the Summer window. The tabloid also mentions that Chelsea and Bayern are interested in signing her.

It is not the first time that a foreign team has knocked at her door as Paris St Germain were interested in signing her  a couple of seasons ago.

Is there a real possibility of seeing the forward leave the club?

She has been at Arsenal for eight seasons now and you would not be surprised if she wanted a change of scenery after such a long time at the club.

Another point that could tip her choice towards moving is playing in her natural position at City. Dan Carter, who is a natural number 9, has been played out of position for so many years now that you could easily forget that she spent three or four seasons up-top under the previous managers.

The fact that there will be three number 9s at the club next season (Taylor, Mead, Mediema) means she is unlikely to play in her favourite position yet again and the Mirror alludes to this, linking it to England. “City believe they can offer Carter progression in her career to help bolster her England future,” they write.

Recent history suggest that Mark Sampson likes players who play for Manchester City as they are the dominant force in women’s football. You just need to look at Melissa Lawley who has been consistent for two or three season with Birmingham City and as soon as she moved to Manchester City was called up for England.

Of course, Dan Carter has already been called up for England, scoring two hat-tricks against Estonia, but is simply a fringe player at the moment and the prospect of regular football for England would be certainly a big incentive.

Will Arsenal try to keep her with a new contract? 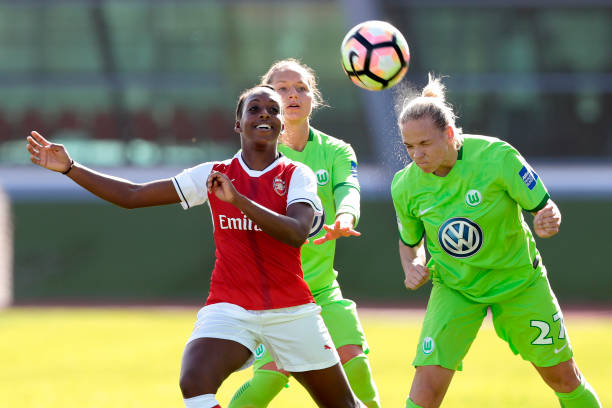 We know that they can match £80,000 wages as Kim Little is rumoured to be earning even more.

But with 10 forwards currently on the club’s books, you cannot really see all of them staying for the 2017/18 season…