Following Monday’s new FA three year strategy called “gameplan for growth” for women’s football, it has emerged that the FA is looking at having an English player quota and a salary cap in the FA WSL.

First let’s have a look at the 2016 FA WSL regulations:

“Home Grown” means irrespective of nationality or age, any Player who has been registered with a Club or club affiliated to an Affiliated Association for a period, continuous or not, of three (3) seasons or thirty six (36) months prior to their twenty first birthday (or the end of the season in which the player turns twenty one (21)).

The current situation is clear, a club can have up to 40 players overall for their first team and development team with as many EU/EEA players as they want and two non EU/EEA players. There is no English player quota, but a homegrown player quota, this is due to the EU laws on freedom of circulation for workers.

Of course, this rule can change with Brexit. As soon as England leaves the EU, the FA can restrict the number of EU players, like they do on non EU players at the moment. For example, they could say each club can register five non English players overall, pending work permit approval.

That way English players would definitely be protected, although the question of the Scottish, Welsh and Irish players would come into the equation. In my 2016 statistics, there were 28 neighbour players (Scotland, Wales, Northern Ireland and Ireland), 24 European players and 10 non EU/EEA.

Including the neighbour players as “non English” would be a problem for certain teams as per the 2016 table below. 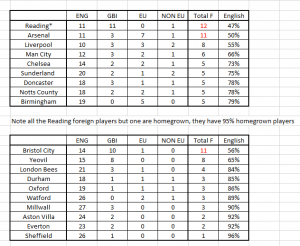 This is a very flexible salary cap and replaced the previous and original salary cap put in 2011. At the origin of the FA WSL, clubs were only allowed four players to be paid above £20,000 per season.

The AP article quotes Sue Campbell: “We are still in that discussion. We are talking about moving to a hard salary cap … where you can have your marquee players but you have a salary cap that holds the game in balance.”

The FA are looking at going back to the original rule in my opinion and while it is looking to make it a more competitive league, you have to wonder how they will apply this? Will clubs get rid of players because they have too many players that are well paid?

Will this prevent top quality starts from abroad to come to the FA WSL? I would think so and to be honest, it is consistent with the idea of getting an English player quota for teams. If the top players can get better wages in the other Leagues, they certainly won’t come to the FA WSL.

You can see why the FA targets the 2023 World Cup rather than the 2019 one, because the regulations changes won’t have enough impact for the next two seasons. It will be very interesting to see the direction the FA WSL will take from 2018/19 and we will know very soon who will retain their licence for that season, as results will be disclosed mid-May.