On this day 10 years ago, Arsenal Ladies won the UEFA Women’s Cup (now Champions League) after drawing 0-0 at home to Umea UIK following their 1-0 away win thanks to a rare Alex Scott goal.

Arsenal Ladies are the only English club to have won the UEFA Women’s Cup/Women’s Champions League and they did against a full-time professional team while they were still semi-pro training just two times a week.

It is an incredible achievement that no women’s football club in England is likely to achieve again as FA WSL teams are not allowed to compete in County Cups any more and the Community Shield disappeared a few years ago.

Below is the full record for the 2006/07 with the games result and tactical line-ups as well [click to view large version]. 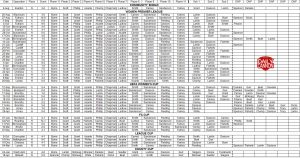