Paul Merson believes that Arsenal would have ‘have no qualms’ in selling Alexis Sanchez to Chelsea to avoid losing him for free next season.

Despite Alexis saying he would like to see out his contract with Arsenal, Paul Merson believes the player will leave in the summer – because Arsenal will have no choice but to sell him.

“I know the way Arsenal work so there is no way they will let Sanchez leave for nothing if they can get £50m for him in the summer.

“They will have no qualms in selling him to Chelsea. Arsenal will have no choice – if Chelsea are the team that are prepared to pay £50m then Arsenal won’t let him see his contract out.

“People say, ‘Oh well, they won’t sell to Chelsea’, but they sold Robin van Persie to Manchester United so they won’t be fussed about that.

“I definitely think Sanchez could be a Chelsea player next season. He is a world-class footballer so he would fit in at Chelsea.

“People say he is not the same player but he will get you a lot more goals than Hazard. If they can sign Sanchez for £50m and get £100m for Hazard then I think that is good business.

“It is terrible how Arsenal can let a player of that talent [Sanchez] run the years down on his contract,” he said.

“There’s about eight of the players with contracts running down and I find it extraordinary that they are in this situation.

“Because of everything going on with Arsene Wenger, I think they have just forgotten about the players.”

Hazard and Alexis are, of course, not like-for-like players. But we compared their stats anyway: 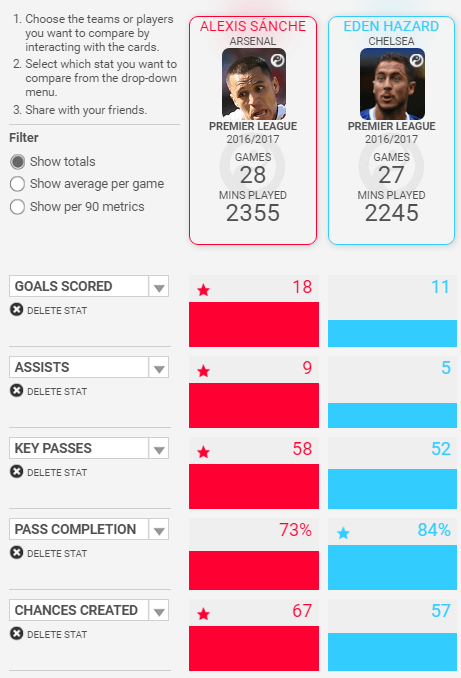