The Mail on Sunday are today reporting that Arsene Wenger is moving closer to deciding to stay at the Emirates.

‘Sources at the club’ report that the mood in the Arsenal dressing room since the hammering at the hands of Bayern Munich has turned to defiance. They want to turn the season around and finish well, although I’m fairly certain that should be the case regardless of any other factors. Why wouldn’t they want to turn it around and end well?

Wenger was quizzed about his future by BT Sport after the game. In fact, it was pretty much all they cared about with no questions about the game being put to the manager. Wenger claims he still hasn’t decided and no matter what way the reporter came at the question, he got nothing worth anything from the boss. 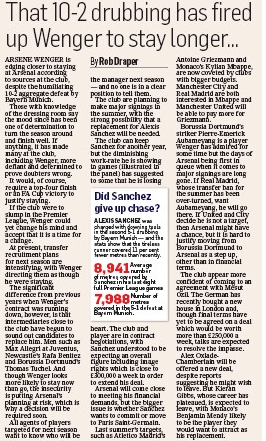 The MoS say that a top four finish and the FA Cup would be required to ‘justify staying’ but it’s impossible to know if this is based on any information or simply Rob Draper, author of the piece, making assumptions.

Draper also claims that transfer activity at the club is ‘intensifying’ with Wenger directing operations. But he adds that ‘intermediaries close to the club’ have started to sound out possible Wenger replacements, from Max Allegri at Juventus who has been the most heavily linked to Borussia Dortmund’s Thomas Tuscel, with Rafa Benetiz thrown in for good measure.

Draper also adds that Alexis Sanchez is now seeking a weekly wage closer to £300,000. It’s not clear if this is still the £280,000 he was said to be ‘demanding’ or if this figure has risen again.

And, finally, the club are said to be back to being ‘confident’ over Mesut Ozil renewing with a new deal coming Alex Oxlade-Chamberlain’s way which is no surprise at all. I said at the time all the reports about him being unhappy were likely just his agent trying to posture for a better deal from Arsenal. I see no reason to change that point of view now.