Despite scoring a brace against Hull City, Alexis Sanchez still wasn’t in top gear at the Emirates on Saturday.

The Chilean’s brace against Hull saw him become the highest scorer in the Premier League so far this season with 17 goals. However, apart from finding the back of the net twice, Alexis wasn’t quite as sharp as we’ve come to expect.

Alexis completed 26/36 passes against Hull, which is gave him a pass completion percentage of 72%. His average is 73% so this isn’t too terrible. To put this into perspective, against Chelsea, when everyone was terrible, he still managed 76%, although his lowest was against Watford when he only managed 67%. 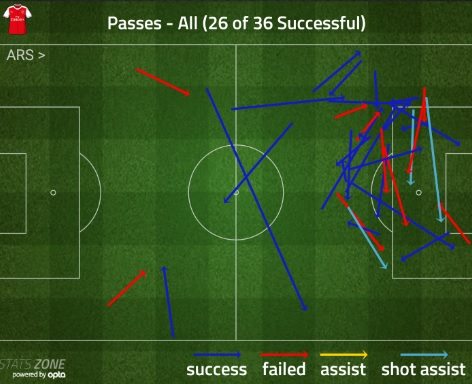 Out of the 36 passes Alexis made in total, 31 (23 successful) of them were in the final third. While I understand that he’s an attacking player, Hull had Arsenal well and truly against the ropes for spells in the second half. They had nine shots in total, four on target. He needs to be chipping in all over the pitch, not just hanging around in the opposition half waiting for us to break. You can tell he’s not completely selfish by how many crosses he makes and how often he tries to set other players up, he just needs to remember that he has other duties.

The 28-year-old had the most shots out of any other player; no surprises there. He attempted six, four were on target and two found the back of the net. And he created three chances although none resulted in a goal.

Alexis won 4/5 take-ons and committed the most goals (3). 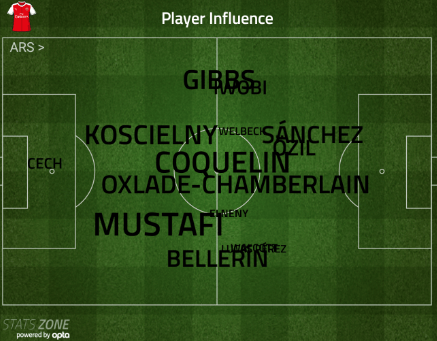 For a forward who scored two goals and made the second-most passes in the final third, you’d expect the Chilean to have more influence on the game but overall, he was pretty quiet. I wouldn’t say anonymous because I don’t think Alexis does anonymous. But he was definitely not as sharp or creative as he usually is, although he did put through some excellent passes. Maybe he needs a rest, maybe there’s something else going on behind the scenes but none of the players, except maybe Alex Oxlade-Chamberlain, appear to be up for it these days.

Looking at the nature of the two goals Alexis scored – one scrappy, one a penalty – shows that perhaps the fact he got a brace flatters his performance. However, in a game where everyone looked hungover again, he was one of our better blokes.