Alex Oxlade-Chamberlain once again had a terrific match in the centre against Hull City on Saturday.

The Ox has been one of Arsenal’s only bright sparks over the past few games and it’s no coincidence that this has been since Arsene Wenger moved him to a central midfield role rather than the wing.

Alongside Francis Coquelin, the Ox has been dominating the midfield, as well as looking confident and comfortable on the ball.

The midfielder completed 41/48 passes against Hull, 19/26 of which were in the final third, which was the third highest amount under Mesut Ozil (24/32) and Alexis Sanchez (23/31). What’s more is that if you look as his passmap, the 23-year-old was trying everything. He was passing the ball here, there and everywhere, up each wing, into the box, through the middle. It really proved how strong and assured he is in this position. 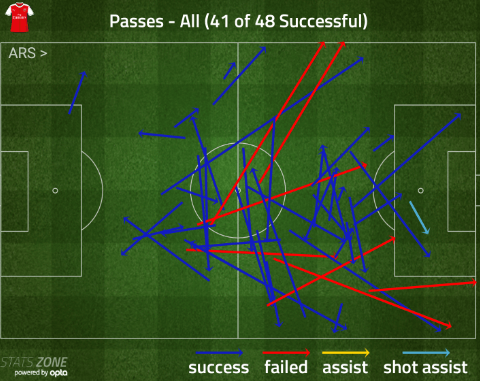 Alex’s pass accuracy against Hull was 85; his average in the Premier League is usually just over 81%.

The England international had one shot, created a chance, won the most take-ons (5/5), recovered the ball nine times, won 2/4 tackles, made one clearance, won an aerial duel and only committed one foul.

When Alex was subbed off in the 82nd minute, it was quite rightly to a standing ovation. If he continues like this, the future’s looking very rosy.