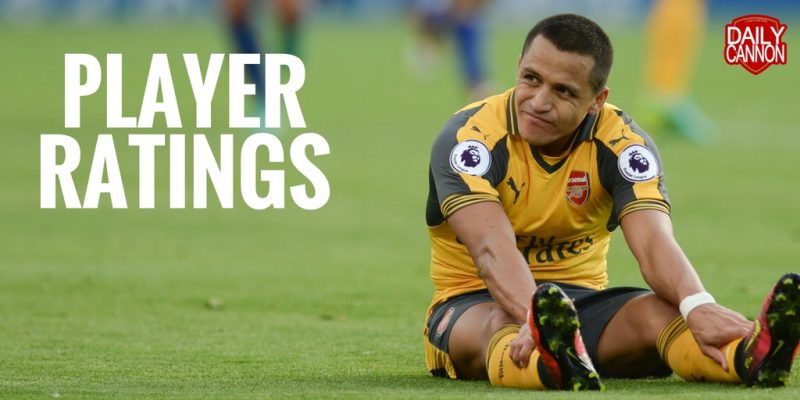 Alexis was gifted the opening goal, but before Arsenal could capitalise properly, Bournemouth received a gift of their own. Nacho Monreal penalised for a penalty area tangle, Callum Wilson rolling the resulting spot kick home. Theo Walcott headed us back in front and there was a bit of huff and a lot of puff before Alexis gave the scoreline a slightly undeserving gloss right at the end. You can read our take on the events (and referee) here.

Sent the wrong way for the penalty. Everything else he did was at his usual, high standard, including a crucial, point blank, save from Benik Afobe with the scores finely poised.

Back in the team as a result of Hector Bellerin’s ankle injury, the luckless Debuchy lasted just 15 minutes before injury struck again. Clearly distraught, he headed straight down the tunnel. One wonders if we’ll ever see him in an an Arsenal shirt again. [He thinks the injury is severe]

Booked for dissent as the team lost their heads around the penalty award. He was, maybe, lucky not to concede a penalty of his own for a two handed push on Steve Cook. Didn’t really notice him otherwise. A good thing, right?

Possibly lucky not to concede a penalty at Old Trafford last week, the Karma Police came for Nacho man today. The penalty initially looked harsh as he bumped hips with Callum Wilson, but on second and third looks it seemed more like Wilson fouled him. A gorgeous cross for Theo Walcott to head home made up for his ‘transgression. Was that another penalty he should have conceded in the second half? Altogether now, ‘I did not see it’…

Neat and tidy in his passing, if not in his shooting. A bit milquetoast for me, but I do like how well he is able to deal with the ball on the edge of our box.

There has been much clamour for Granit Xhaka since we lost Santi Cazorla to injury. A bright start today, before fading out with the rest of the team for most of the first half. Recovered well and showed enough to suggest he can be a great asset to us as we head towards the new year. Ran more than any other Arsenal player, completed more passes, made more ball recoveries and tackles.

Always available as an outlet ball, his link up play with Alexis was useful without ever being particularly breathtaking. Always able to buy time with a body feint or an unexpected pass even if he wasn’t quite at his usual imperious standard. Involved in the moves that led to both our second half goals.

Despite  a barnstorming run early in the first half, the Ox’s first 45 minutes could best be summed up by a not so clever free kick routine he attempted with Mesut Özil. Improved in the second half as Arsenal got on the front foot and into spaces that weren’t there in the first half.

Able to celebrate the birth of his baby boy with a well taken second half header. Not much else went right for him, whether slashing a cross into the Clock End from wide on the right or miscontrolling an Ox pass in the second half when well placed.

Involved in everything good about our game, he was the last player Steve Cook would have wanted to gift the ball early on. He meted out the appropriate punishment with his habitual calmness. Played deep enough to look like a holding midfielder at times. But it was from deep that he helped build the move that led to Arsenal’s second goal. A ferocious drive just before half time would have given Arsenal an undeserved half time lead, had it not cannoned off the bar. The second goal his performance deserved came as he tapped in Giroud’s cut back in the last minute. A gorgeous pass with the outside of his right boot to Mesut Özil was the pass of the match.

His dogs must be so proud of him.

By my count, our fifth or maybe sixth right back of the season. He looked it when replacing Debuchy early on, but eventually settled down and defended well.

Plan B didn’t get his goal today, but he did tee up Alexis Sanchez for the killer third goal. He also picked up a hamstring injury.