Its that time of year again. A new season, and soon enough a new edition of Football Manager and I’m going to show you how to be Invincible.

Yes. I am a geek. My football obsession is fairly well expressed on this site. My History obsession shown by my degree and bookshelves. My fascination with acting defining my career. And my love of computer games most commonly proven via Football Manager also helped me win more from my football odds today.

Sure, I own every edition of Civilisation (including Friday’s release!), all kinds of games about wizards and dragons, and have concluded a plethora of story led adventures, none of which help with odds comparison better than this game.

But it always comes back to Football Manager.

I had the black and white stick figures of the mid-late 80s Kevin Toms version, with the randomness of Peter Reid being either hopeless or world-class on each new save. I flirted with Premier Manager, The Manager, Sensible World of Soccer, Ultimate Soccer Manager, Player Manager and a plethora of even more obscure title on the same theme. I even briefly indulged in play by mail football management in the days before the internet was on the horizon of public availability.

Basically since then, I have played the proverbial out of every edition that later officially formed Sports Interactive have had responsibility for, from the halcyon days of winning the European Cup with a Darren Eadie powered Barnet, to more recent efforts at trying to emulate and then improve every Wenger tactical experiment since the Invincibles.

Now FM17 is looming large, and for those with the kind of spare time currently incompatible with my current work schedule, the BETA has been released for testing, final feedback and pre-release bug elimination.

I’m not one for BETAs. The game always changes so much between the BETA and the first couple of launch patches, I hold back and wait. Well; for a few days after release. Most years. Accordingly, I stay loyal to old saves and try to second guess how to make them work on the following year’s match engine.

Accordingly, here is a little insight into my most recent save on FM16.

Like many fans, I was excited by the tactical shift exhibited so far this season, and wanted to try to implement this in game. I was already half-way there with experiments from my previous save, so resolved to do it properly and document my first season for the benefit of fellow FM-loving Gooners.

Ah, Steam Workshop. Sometimes a bloody nightmare, but great for FM. Facepacks, real fixtures and database updates wait in plentiful supply. So of course, I suck them all into my FM for a more complete playing experience. Crucially, I download transfer updates and updates to youth teams at big clubs, so I start with Xhaka, Lucas, Mustafi, Holding and a competent Iwobi.

With the updates in place, I feel we don’t really need much in the way of transfers and want to try with original squad as much as possible, so I hoover up a few young kids for bargain fees, a couple of free-transfers for Carlin Cup duty, and send anyone who isn’t going to get any game time on loan to raise a little cash. The only significant signings I made were Marc Bartra on a cut price fee in January to help with a minor injury crisis at the back, and Kingsly Coman on loan, which was entirely unnecessary.

Ok – this is the big part. Trying to work out what this season’s tactics mean in terms of team balance and the changing roles of players. 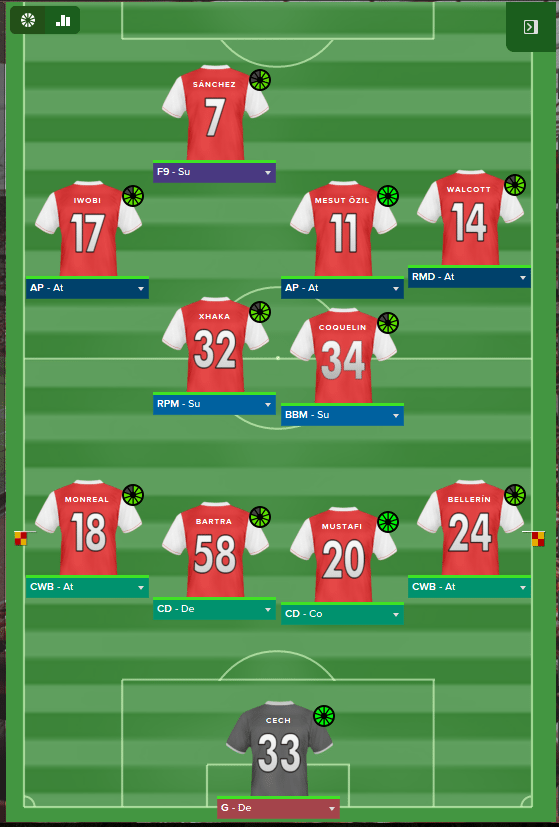 Clearly Alexis is now in a false-nine role, due to the dropping deep to create space for others, and for his creativity. This has shifted the dynamics of the team massively this season, and on top of this, his mobility and work-rate mean that the team can transition much more quickly this year. I decided to position him left of centre, a la Thierry Henry, in order to make him pull out to the flank more when we counter and to create more space for Ozil and Walcott.

Ozil as an Advanced playmaker on Attack duty is fairly self explanatory. Same as always but now with more desire to get into the box and score goals. In covering this role Rambo offers less creativity but more goal threat on balance.

The defence is also fairly self explanatory. Depending on the personnel, one central defender always plays slightly deeper to sweep up behind a more aggressive ball pursuer, and both our full-backs like to get forward as much as humanly possible. The pace of the current back four also allows for a nice high line and an offside trap when we are in possession.

In central midfield, Le Coq’s role this year is clearly a more box to box one, with the intention of winning the ball further up the field, and we have even seen him get into the  box and be a goal threat, as evidenced vs Hull this season. This role also makes alternating him and Ramsey a more seamless interchange if needed, and also suits Elneny. Against stronger opposition he can be deployed as a Ball-Winning midfielder on support duty, which given Coquelin’s attributes amounts to a slightly more aggressive variation of the same thing.

Alongside him, both Xhaka and Cazorla can thrive in a roaming playmaker or deep-lying playmaker role, depending on the opposition. This player’s role is get the ball deep and distribute, getting it to Ozil et al as quickly as possible.

Out wide, I had a slightly more difficult task to define roles. For me Walcott has always been a Raumdeuter or “space interpreter” (thanks Thomas Muller) when he has been at his best. Not a conventional wide-man aiming to put in crosses, not an inside forward looking to cut in from wider positions with the ball, nor a conventional striker, as last season’s travails showed. His best attributes are his pace, movement and, to a degree, his finishing. Accordingly, he is most effective when he does more of his work without the ball, pulling defenders around and getting into positions where he can score or play a final ball without significant responsibility for the team’s build up play. On FM, this role aims to do just that.

On the other flank, the emergence of Iwobi has brought a greater balance to our attack. As I wrote before, his great capacity as an intelligent transition player has brought us a balance we’ve lack on the flanks since Nasri left. Accordingly, I decided to try him as an attacking playmaker, with personal instructions to get further forward. This theoretically dovetails well with Sanchex pulling out the left.

Of course, a large part of tactics on FM is team instructions, which add a broader ideology to the individual player roles. I went for: 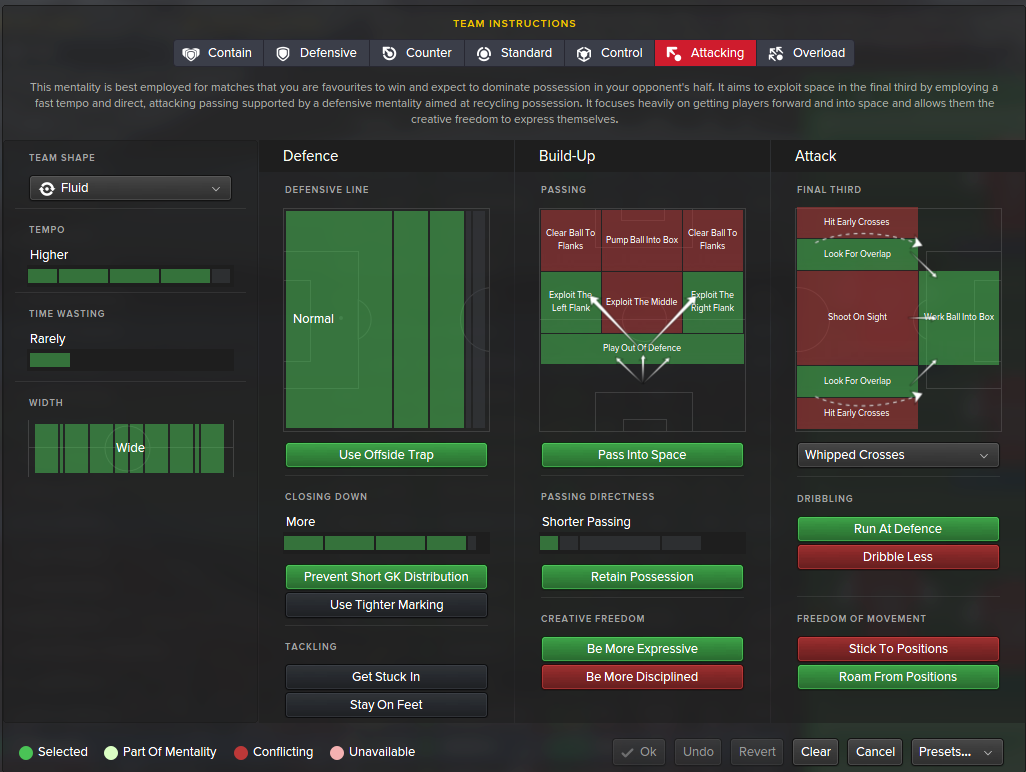 To me, this is all fairly self explanatory, and in many cases fits the long-term Wenger ideals, with slight tweaking to fit this years approach, such as pressing teams playing out from the back and now firing low crosses in when appropriate rather than aiming for the absent Giroud.

So did it work?

Well, of course it did, or I wouldn’t be sharing it under this title. And better than could have possibly been anticipated. Not only did the team do incredibly in the league;

with perhaps my favourite ever FM result; 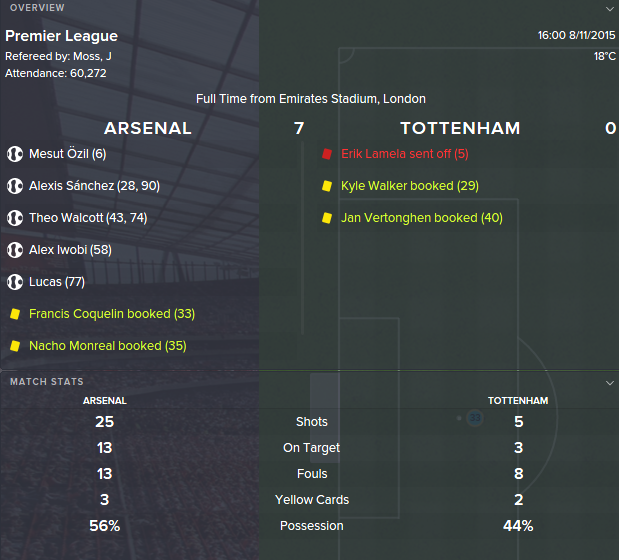 but it was wonderfully effective in Europe too: 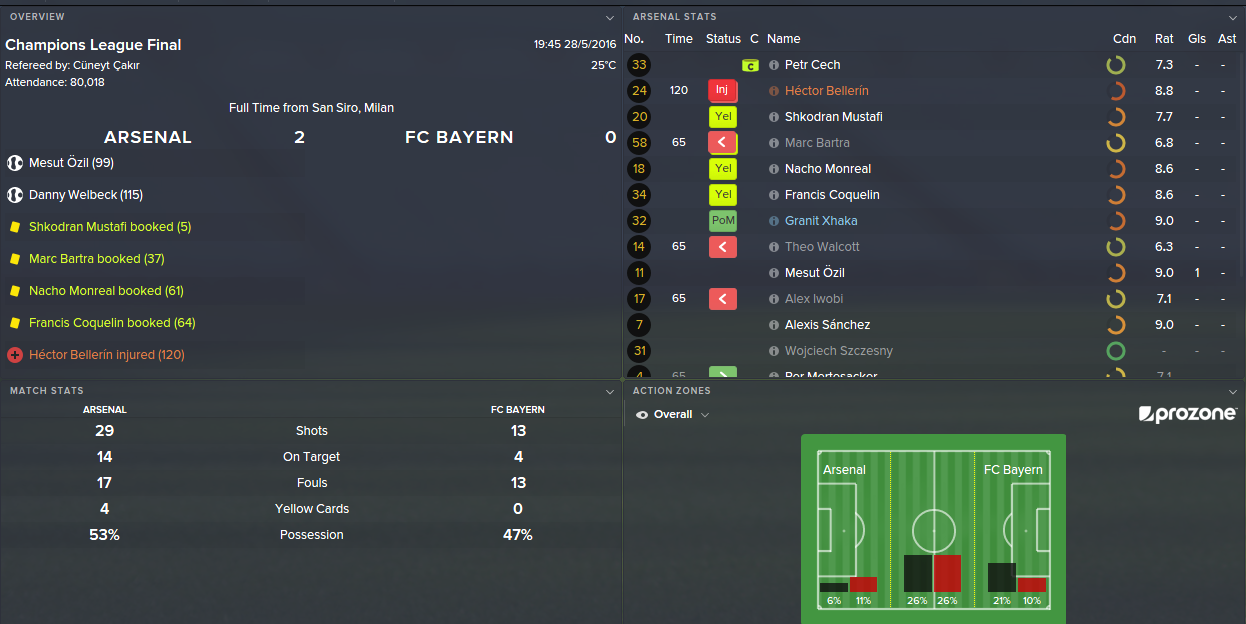 More importantly, tactically it achieved EXACTLY what I wanted it to, with Theo sustaining the form he has shown so far this season in reality, along with similarly brilliant contributions from Sanchez and Ozil.

If any of you are still playing FM16 and want to try this out, you can download the tactic HERE.

Of course, it remains to be seen if this will translate into FM17 as successfully, but when the full game is released I’ll be testing the same method, and will feed back.

One thing IS clear, as far as FM16 is concerned Wenger’s tactical tweaks this season make perfect sense!

No Arsenal bid for Nabil Fekir despite reports in Spain

Arsenal 1st bid for Lokonga rejected but optimistic for a deal