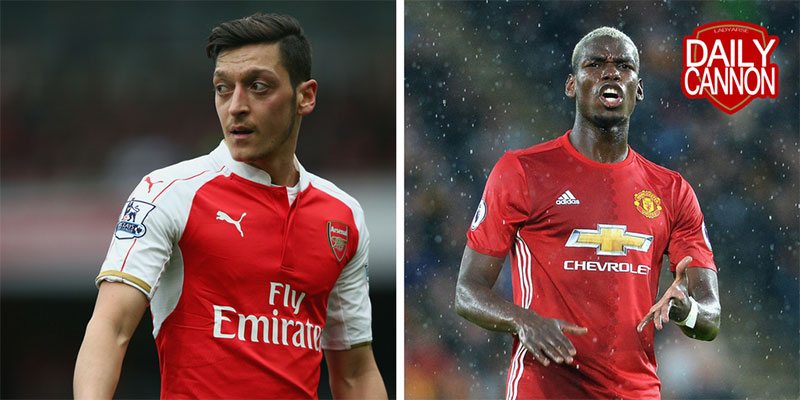 Paul Pogba, once again, failed to show up for Manchester United this weekend, prompting many Arsenal fans to ask – where is all the heavy criticism of United’s player?

No doubt Paul Pogba still 'needs time to settle' whereas Ozil was already 'nicking a living' by this point.

This wasn’t entirely accurate, as I’ll explain, but you get the sentiment.

By the time Neil Ashton claimed Mesut Ozil was ‘nicking a living’ for Arsenal off the back of a display against Bayern Munich in March, a game in which he did his hamstring a few minutes into the first half and soldiered on until the break, Ozil had already registered 13 assists and 6 goals.

We are, of course, some way from March just yet, so if we look at Ozil’s stats from the time he joined Arsenal until October 24th 2013, how does he stack up against Pogba?

Ozil was criticised from the very start, with pundits and some journalists claiming that a player who costs as much as £42.5m should not need (nor get) time to settle. It seems, however, when you are worth more than double that, you are given all the time you need.

This isn’t to say that I want to see Pogba hounded in the media. No player deserves that, least of all one who has just arrived to play in a new league.

It is simply to highlight, again, the different standards that are placed on Arsenal players.

Pogba has been granted the luxury of ‘time’.