Julian Draxler, Riyad Mahrez, Alexandre Lacazette, that Mustafi guy. Everyday, a different rumour for us all to obsess and puzzle over.

Admittedly, it has only been in the last week or so that I have begun to obsess and puzzle, but I’m here with the rest of you now. I feel slightly calmer about things than perhaps last week’s birthday cri de coeur might have indicated. I think that is a simple case of being aware that something, we don’t know what, but something is in the works.

I’ve just rewatched the excellent first season of the Danish series, Forbrydelsen (aka The Killing). It’s one of the best series of television I’ve ever seen. It also might help to make sense of Arsenal’s transfer dealings. Those of you who have seen this show will know exactly what I’m talking about, those of you who haven’t…well, you need to get on it now.

Suffice to say that the show (describing it as a murder mystery barely does it justice but that is effectively what it is) ended with a different person in the frame for murder in at least half of its twenty episodes. One day Troels Hartmann, the next day John Lynge, then Rama Al Kemal and then Troels Hartmann again. The carousel of murder suspects never stopped spinning, until one day it did and we, finally, had ourselves the culprit.

No, no spoilers here, but remembering that this series drove me to absolute distraction – I’m talking sleepless nights here – the first time I watched it, there is an obvious parallel to be drawn with obsessing over Arsenal’s transfer activity. Even if the exact nature of our transfer dealings is even more obscure than the identity of Forbrydelsen‘s bad guy and following it a lot less entertaining. The important thing to remember is that, just as ace homicide detective Sarah Lund did, we will eventually find our man.

Or maybe we won’t…

I think we can be fairly confident something’s occurring though. Barely had I typed up last week’s article than Lyon announced – via Twitter! – that they had rejected an offer of €35m from the Arsenal.

At times like this, I am always reminded me of the Gooner article I wrote saying that Freddie Ljungberg needed to be replaced in 2005. That issue went on sale the day the super Swede put in a man of the match performance, at Charlton I think.

Anyway. We have Lyon publicising a rejected bid in a manner that seems to scream not, ‘We’re not selling this player. Ever’, but, ‘Well, yes, we might sell you Lacazette but only after you have coughed up much, much money than you are currently prepared to!’

And then there is Julian Draxler using Bild to tell the club he only joined last year, Wolfsburg, that he wants out. We are all aware that Arsenal have a long standing interest in the young German winger. Although his statement that he would like to join a “top club in Europe” may have the cynics wondering where, exactly, that leaves us.

We also saw, earlier in the week, Arsène Wenger dealing, verbally at least, with repeated questions regarding Riyad Mahrez in a manner that would have made Geoffrey Boycott OBE feel hugely nostalgic. The look on Arsène’s face though, wasn’t the pained look we get in January when he’s being asked why we haven’t signed anyone to supplement the trail of dead bodies in the treatment room. No, it was more ‘something’s happening, I can’t tell you what, but you’re likely to soil yourself when you find out about it’. You know, like when we were about to sign Mesut Özil. 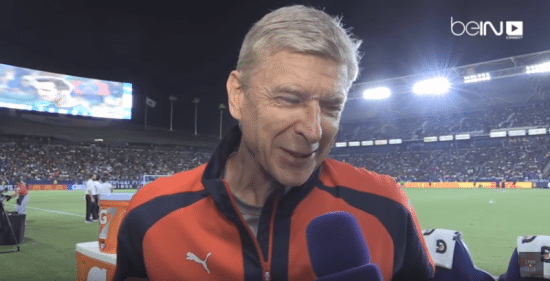 Finally, as far as reasons to be optimistic go, we have the latest muddled statement from Theo Walcott.

I mean, genuinely, what does “I want to know where I want to play.” mean? You’re 27 now, Theo, if you don’t know where you want to play by now, when are you ever going to figure it out? It would be easy to pile in on Theo here. However, if we choose not to do that and look at the bigger picture, does his stated desire to return to the wing hint at a proper centre forward arriving? Or is it nothing more than acceptance that he’ll never be a centre forward at Arsenal?

If he is happy to return to the wing, with Alexis already undroppable on one wing and Alex Oxlade-Chamberlain once more impressing in pre-season (yeah yeah, I know, do it when it actually counts for something), does this mean that links to Riyad Mahrez are in fact Arsenal’s version of the red herrings so artfully deployed by Soren Sveistrup on Forbrydelsen?

Olivier Giroud will not be back for the start of the season and Chuba Akpom, despite his goals in pre-season, seems an unlikely candidate to be leading the line next Sunday afternoon. Bearing this in mind, with Theo basically saying that being an Arsenal centre forward isn’t for him, we can surely infer that behind the scenes, those who sign players for Arsenal are closing in their target. Just as long as their target is someone who will put the ball in the back of the net with some degree of reliability.

The fear is that we end up signing someone for the sake of a signing. I mean, nobody wants a Park Chu Young type turning up in north London, do they? I don’t think, though, there’s much danger of that this summer.

Before I go, I was amused to see that in their series of pre-season previews (try saying that quickly), the Guardian are predicting a 5th place finish for our boys. For years and years and years, we have seen the demise of Arsenal as a top four concern predicted, but fail to materialise. Yes, last season ended up being a disappointment, but we still finished second whilst every club traditionally considered as a rival was even more disappointed.

There are new managers, now, at all of those clubs; whilst it would be logical to expect Guardiola, Mourinho and Conte to energise and improve the squads they have inherited, nobody can say for sure just how much of an effect they will have. Or if they will be able to make sufficient improvements to get their clubs challenging for the title next season.

There is a lot of work to be done and not just in London, N5.