The news started with one solitary tweet, from the Guardian’s Stuart James, was retweeted by some of his colleagues and was soon given veracity by the BBC’s David Ornstein.

Just an ordinary Friday night suddenly became something much different as opinions on the Leicester City striker flew back and of forth across the internet with the speed of, well, Jamie Vardy.

It’s fair to say that this news was polarising.

There are those who look at Vardy’s perceived nastiness, his penchant for simulation and, most troubling, the video of him racially abusing an Asian man in a casino and are instinctively appalled by Vardy.

When even football’s ultimate Mr Nice, Gary Lineker gets himself in trouble for defending you, you know there’s a problem. They may also look at him and think that this is just a marginally more lethal version of Theo Walcott enjoying a late career patch so purple it’s as if Prince himself is smiling down on Mr Vardy.

It may even be possible to look at Jamie Vardy without thinking any of those things and wonder how he will fit into the current Arsenal set up, or how a striker who thrives on space in behind will deal with defences camped on the edge of the penalty area.

Or how he will deal with all those penalties he used to win becoming yellow cards for simulation.

On the other hand, though…

We all know Arsenal need a proven Premier League goalscorer.

Olivier Giroud has just gone through the worst drought of his professional career – 14 Premier League games if you didn’t know and nobody really wants him to be the main man up top anymore. Well, I don’t.

Vardy may only have delivered across one season, but did so in spades last year. Does one season of goals give Arsenal enough reason to take a chance?

Here’s something you won’t often hear anyone who writes about Arsenal for a hobby admit, but, I don’t know. I mean, how can I know for sure?

All I can do, all any of us can do, is make an educated guess.

The more I think about it, though, the more I believe that it is something of a no-brainer.

Reports are that Vardy’s actual release fee is something less than the £20m previously quoted. Vardy was the Premier League champions top scorer last season and would give Arsenal a threat through the middle that hasn’t really existed since Thierry Henry departed for Barcelona nine years ago.

I imagine that Helen Trantum will counter claim for Theo Walcott here, but we all know he has only occasionally been convincing at centre forward.

And you know what? As someone who regularly bemoans Arsenal’s – and particularly Theo’s – lack of edge on the pitch, I’m all for us signing someone who is clearly prepared to do whatever it takes to win a football match. I imagine Alexis would welcome the presence of such a character in the squad. I don’t think it’s coincidental that Ian Wright is such an obvious admirer of Jamie Vardy either.

Wrighty was 27 when he signed for Arsenal and came with a burning desire to make up for lost time, having only made it to the ranks of the professionals at 23. We got six years of goals, goals, goals from my hero before injury brought his Arsenal career to a premature close.

Vardy is 29 and has made a similar journey, he was playing for Fleetwood Town as recently as two seasons ago.

It’s a big if, but if Vardy can make the jump in a similar fashion to Wrighty then this could be a great signing (let’s gloss over the fact that Wright joined the champions in 1991 yet didn’t win a medal himself until he missed most of the 97/98 season with injury). Akin to Alex Ferguson taking that Dutch guy off our hands in 2012, he didn’t do too badly for them did he? For one year at least.

And that’s the rub for me.

If Jamie Vardy came here and was able to score the goals that delivered us the 2017 title, I’d take it. I’d be a lovely early 40th birthday present.

I wouldn’t even care if he only scored 5, or 10, the season following. After all, Danny Welbeck – we hope – will be back from injury by then.

I think, if you look at this Vardy move as trying to rectify an obvious deficiency from last season and giving us an alternative up top to Giroud for a year, then it has to be a good thing. It’s called squad building and it’s something we all wish Arsène did more of.

Yes, replacing a wall with a bullet train will probably necessitate a change in style, but I don’t see that as a bad thing. It’s not like that style has been so wonderfully successful, is it? I mean, giving Mesut Özil a runner to hit seems like a decent plan to me.

Jamie Vardy’s having a party? I’m bringing a bottle. 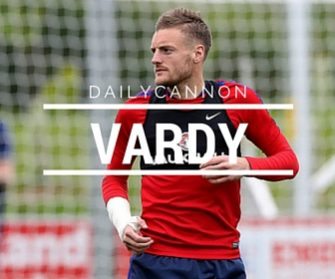