We won’t have much time to “rest” from football (I mean, who even gets a rest with all the transfer gossip?!).

In June, it’s time for the European Championship.

This year, it’s hosted by France and there are 24 European national teams that will fight for the trophy. They are divided into six groups of four with the first three from each group getting through to the knock out phase.

There are some interesting groups, and us Arsenal fans should keep an eye on some more than others.

In group A we have hosts France, with Olivier Giroud as their main striker and Laurent Koscielny bossing the defence as he does for Arsenal. I was cheeky enough to put in Granit Xhaka as well, since his transfer was “all but done” when this post was being written.

In group B, there’s England who many of you would watch even if there wasn’t any Arsenal players representing them. Not long ago we were expecting three or four Arsenal players in England’s Euro team, but it’s only Jack Wilshere now due to Welbeck and Ox’s injuries and Walcott and Gibbs not showing enough over the last few months.

In the same group as England we also have Wales in their first ever European Championship, and Aaron Ramsey leading the team. Hopefully, they will stay in the competition for longer than just the group stage.

Group C has our biggest star, and one of the biggest stars of the Euros for sure. Mesut Özil will try to help Germany win the Euro trophy after winning the World Cup two years ago. In this group we also have our goalkeeper on loan, Wojciech Szczesny, playing for Poland. Will he be our keeper for much longer? Maybe not given his latest comments.

Group D could have been more interesting for us than it is at the moment, but Spain don’t seem to need Santi Cazorla, Nacho Monreal or Hector Bellerin.

I sure hope it will be as my country, Croatia, is in that group as well. Arsenal’s representative here is our amazing goal keeper, Petr Čech, for Czech Republic, and Tomas Rosicky, who I still count as a Gunner even though he won’t be any more.

In the last two groups, we don’t have any Arsenal players. There is Thomas Vermaelen playing for Belgium in group E, but that’s about it.

I designed printables for previous competitions and they were quite popular, and I myself love filling in the results and matches!

You can pick from a design with a final standings table for each group or without it (you can see in photos below).

They are made in A3 format, but can be printed on A4 as well.

I recommend printing them on a thicker paper. 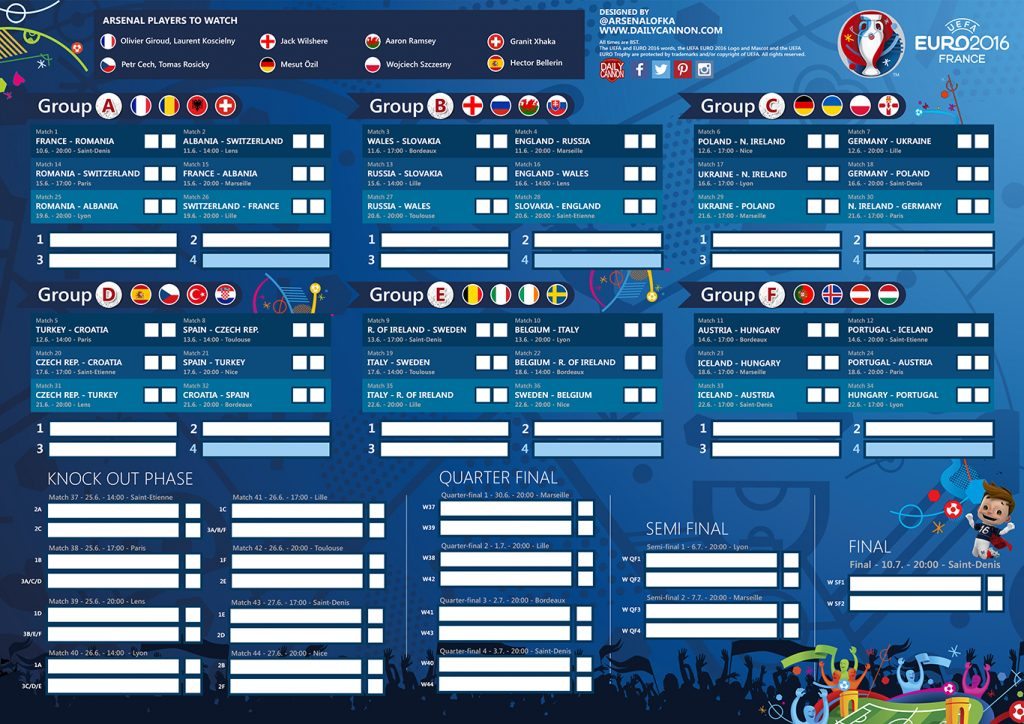 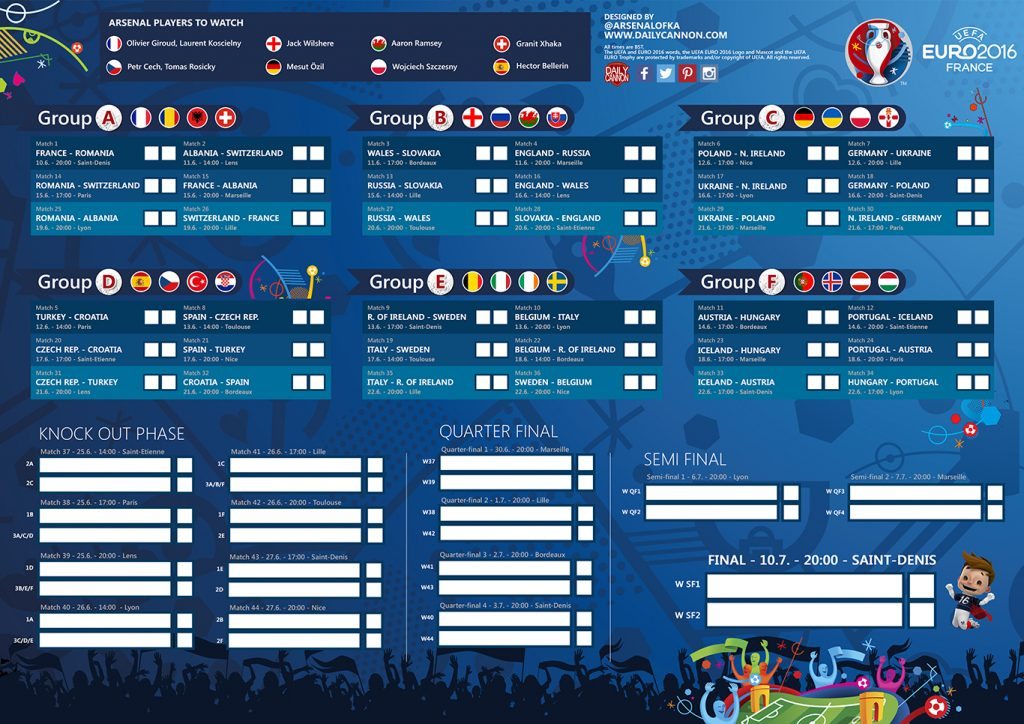 I also made this design into desktop wallpapers in usual sizes, minus the smallest size (1024×768) and mobile versions, because it’s just too much info and it would be too small altogether. 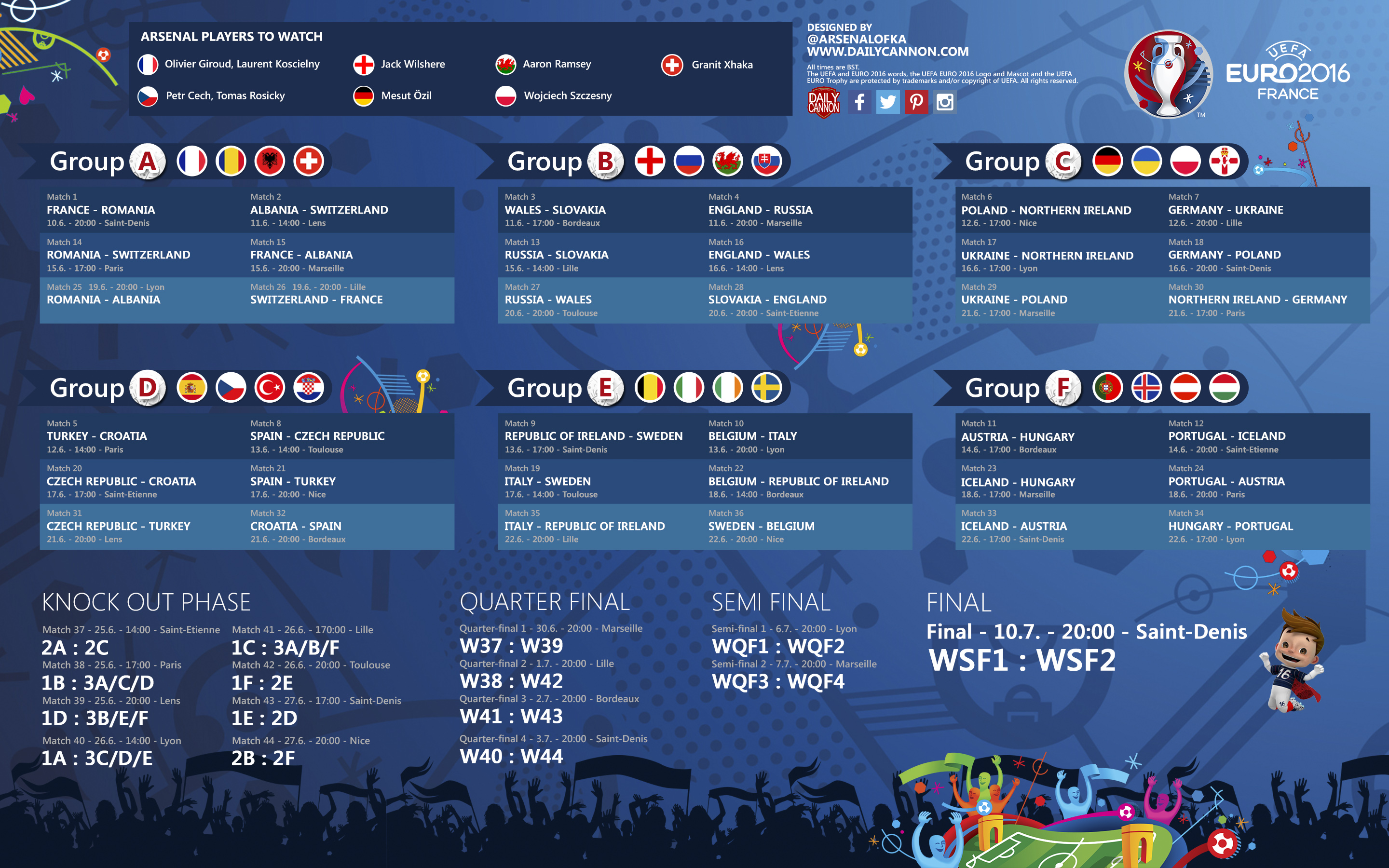 If you decide to print out it, I’d love to see them 🙂 Tweet me a photo on @dailycannon or @arsenalofka