The January transfer window has been busy so far with three arrivals and succession planning apparently at full speed ahead of a summer window that might see a lot of changes and, perhaps, the departure of the old guard?

Arsenal women announced their third signing of the January window on Tuesday as they look to be preparing for a major overhaul in the summer.

The numbers below are the “worse case scenario” that would see a lot of players leaving at the end of their contract or being sold.

It shows that Arsenal are surely looking at regenerating the side by lowering the average age of the squad. 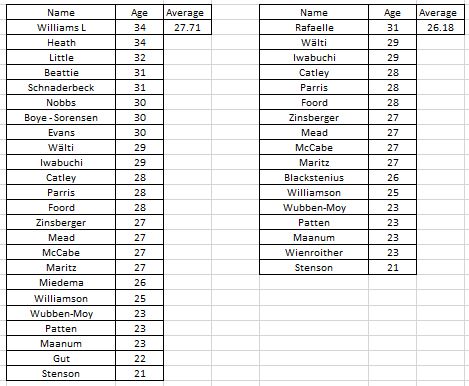 That’s also potentially a lot of experience being replaced by younger players.

Of course, the club will not lose all of the following players: Williams, Heath, Little, Beattie, Schnaderbeck, Nobbs, Boye-Sorensen, Evans, Miedema and Gut.

It would not make sense, for example, to let Nobbs and Little leave the club at the same time. Seeing one of them leave is possible, but both going would mean having to sign a world class playmaker to keep the quality in that position.

At centre-back, the arrival of the Brazilian defender, Rafaelle Souza, is clearly a short term solution to all the current problems, and you would expect her to partner Leah Williamson in the second half of the season.

Next season, we should have Lotte Wubben-Moy and Anna Patten fighting for a starting spot at centre-back. Arsenal might even give Teyah Goldie a professional contract to carry on learning alongside those players.

The full-back position should be covered by Noelle Maritz and Laura Wienroither on the right and Steph Catley with Katie McCabe on the left. However, I would not be surprised to see a left-back come in so that McCabe can play in attack next season.

In central midfield, we should see Frida Maanum, Lia Walti, Mana Iwabuchi and Nobbs or Little. Again, here, it would be unrealistic to see another addition either in January or in the summer to bring more quality and competition to the team.

In attack, the big question is whether Vivianne Miedema will decide to stay or leave.

It makes sense to sign a top player like Stina Blackstenius and we will see how Jonas Eidevall uses her alongside Miedema.

He could use both as central strikers or put one of them on the wing. He could even play Miedema as a nine and half behind Blackstenius.

Then, having McCabe, Parris, Mead and Foord on the wing should be enough, but should Miedema leave, you would expect the club to sign a winger to boost up the numbers and competition.

Again, it has to be said that not all the mentioned players will leave, but it would not be a surprise to see a good number of them go this summer.

At the end of day, if the club does not move forward, it will go backward and run the risk of being overtaken by others who invest more to qualify for the Champions League places.