The visitors managed to keep the Lionesses at bay for 64 minutes thanks to very disciplined defending, England’s lack of clinical finishing and a bit of luck.

Tactically, it was an interesting battle between England, lining up in a traditional 4-3-3 as follows: Earps; Daly, Bright, Greenwood, Stokes; Williamson, Kirby, Toone; Parris, White, Hemp.

The stats do not lie. England had 80% of ball possession and 17 shots to nil by half-time, but the scoreline was still 0-0.

A mix of bad finishing, hitting the woodwork twice and Burns in goal making good saves kept the scores level at the break.

England were building up play on the wings with Hemp very active, and through the middle, mainly via Kirby as Toone seemed to leave the creative work to the Chelsea playmaker.

The wingers sometimes came into the half-space in a congested area to leave the whole wing free for the full back, overloading the central area.

Then, at half-time Wiergman made a very bold change, substituting her left-back Stokes and putting on a defensive midfielder/low playmaker in Walsh.

The City player has lost her place to Williamson, something that would never have happened under Neville and Riise.

So, England ended up in a very unusual combination of 2-2-2-2-2 with four pairs of two players in the central area plus Daly on the right and Hemp on the left. A back two of Bright and Greenwood, two playmakers in Williamson and Walsh, two central attacking midfielders in Kirby and Toone and two strikers up front Parris and White.

That change seem to initially disorganise the England team a little bit and spaces opened for Northern Ireland, who managed to launch a few counter attacks.

Once England were settled, they carried on relentlessly attacking a tiring Northern Irish side.

It has to be noted that the fitness level are clearly different between a professional side and semi-pro players/amateurs and the last 30 minutes, Northern Ireland struggled. They ended up using their five subs to bring on fresh legs.

With the scoreline still at 0-0 with 63 minutes played, the England manager sent on Beth Mead and Beth England for Parris and Daly.

Keeping the same shape with fresher legs, the reward was instant as Greenwood’s corner was not cleared properly and Mead hooked the ball into the top corner with her first touch. 1-0 England.

Hemp chipped the goalkeeper and England touched the ball into the net.

The goal was awarded to England but it might actually have already crossed the line looking at the replays.

Then Mead, who is in great form this season, fired-up by missing a spot at the Olympics added her second and completed her hat-trick within 15 minutes.

She is the first England women’s player to score a hat-trick at Wembley Stadium.

Subsequently to the goal opener, Wiegman decided to balance the team a bit more knowing that the job was done. They went to a back three in a 3-1-4-2 with Bright, Greenwood, Williamson; Walsh, Mead, Kirby, Toone, Hemp; England, White.

The match was a test of Wiegman’s ability to change a game and she certainly did try something unusual and her substitutions made an impact.

Kenny Shiels selected a very defensive set-up to contain England and it worked very well until the first goal went in when Northern Ireland’s legs tired.

The damage limitation tactic was the right one as we saw that every time Northern Ireland started to press England and go higher up the pitch, England players were able to find space and use their superior speed and technique to create chances.

Denying England time and space was the right choice.

The standings in Group E are clear.

England and Austria should compete for the top spot and Northern Ireland will try to steal points from the top two teams to get into the runner-up place and through to the play-offs. 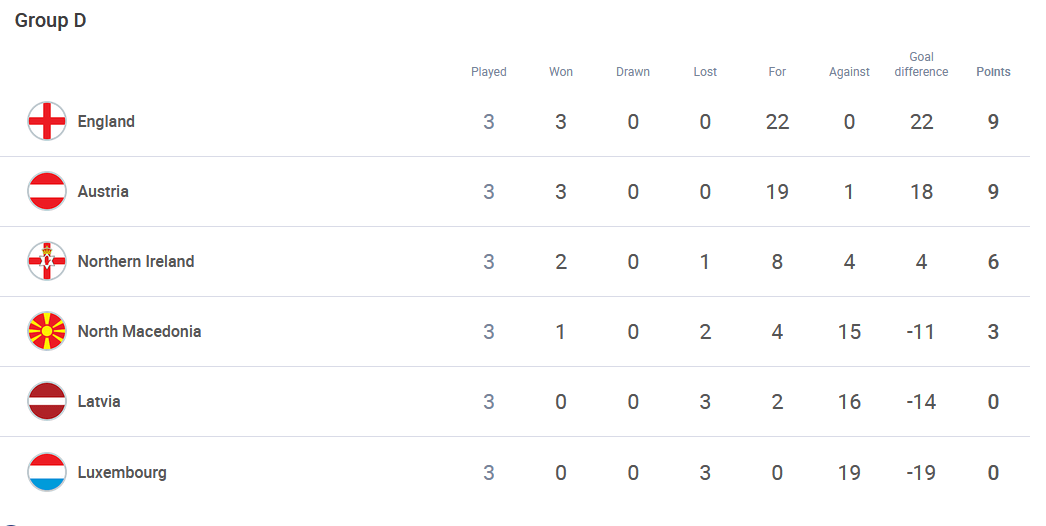 England are away to Latvia next while Northern Ireland will be at home to Austria and need to get something from that game.