The Mail on Sunday thinks Burnley’s penalty against Arsenal should have stood because the referee didn’t make a ‘clear and obvious’ error.

This is getting ridiculous now.

The whole point of VAR is to help rectify wrong decisions. More often, however, it has been used simply to reinforce bad ones, so when it gets a call right, we should be praising it, not trying to convince people it is a scourge of the game.

On Saturday, Ben White sold Aaron Ramsdale short with a back pass that didn’t travel on the long grass of Turf Moor. As the Arsenal keeper stretched to get the ball, it was touch and go whether he would give away a penalty or not.

Having seen this movie 100 times before, we all held our breath.

Matej Vydra duly went over Ramsdale’s leg as expected and Anthony Taylor played his part by awarding the penalty.

We waited as the VAR officials took their time. Eventually, they called Taylor to the monitor, the referee watched the replay and, thankfully for Arsenal, decided, actually, that’s not a penalty.

When you watch it back, Ramsdale gets to the ball first.

That in itself doesn’t make it not a penalty. Getting to the ball is generally irrelevant, how you get to the ball is much more important, a point often missed by many.

Gary Lineker tweeted, “Vydra through, Ramsdale gets a slight touch on the ball but follow-through takes out Vydra.

“Again, that doesn’t mean it’s not a foul. Therefore it’s a debatable penalty but not an obvious error.”

That was all the Mail on Sunday needed.

But Ramsdale absolutely does not take Vydra out.

Vydra goes over the goalkeeper’s leg, which is low to the ground and has just got to the ball before Vydra arrived.

There is simply no universe in which that is a penalty, something Lineker had begrudgingly accepted by the time Match of the Day was on.

You can even see that Vydra was the one to instigate the contact with his tell-tale trailing leg:

(without seeing the specific incidents) UEFA refs' chief Roberto Rosetti briefed before the start of Euro 2020 that if there's a touch on the ball by the defender that's grounds for a VAR intervention.

Even Sean Dyche said it wasn’t a penalty, although he seems perplexed as to why the ‘theory’ of football should apply to the game.

Inside the paper, the Mail on Sunday used the Burnley manager to continue attacking the decision, with a headline shouting “Sean Dyche BAFFLED after VAR denied Burnley a match-saving penalty against Arsenal as deflated boss bemoans his side’s ‘horrendous’ spot-kick record.”

Dyche said, “I have to say the keeper does get a touch so in theory that doesn’t given though you might question whether it was a clear and obvious error.

“But I do get confused. Football changes, the viewpoint changes. Last season, that would have been given. This season, it doesn’t get given. In other seasons, that would be a penalty. The referee seemed clear in his mind it was a penalty.”

Is giving a penalty when it isn’t one not a ‘clear and obvious’ error? It would have been overturned last season, too, because it’s not a penalty and that’s a pretty big mistake.

Even the Mail on Sunday’s ref expert said the call was the right one, although this was buried inside the paper, not screaming on the back page.

“Sean Dyche could have no complaints about the decision to overturn the penalty awarded initially by Anthony Taylor for a foul by Arsenal goalkeeper Aaron Ramsdale on Burnley’s Matej Vydra,” ex-ref Chris Foy wrote.

“On first viewing, you could see why Anthony pointed to the spot — Vydra took advantage of Ben White’s weak back pass, looked to move the ball away from Ramsdale and went down under the challenge. 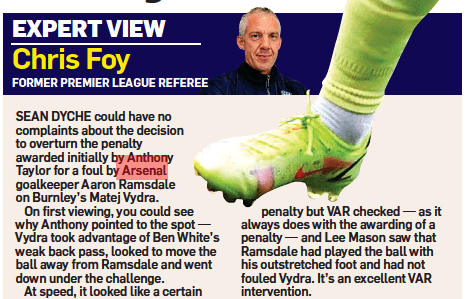 “At speed, it looked like a certain penalty but VAR checked — as it always does with the awarding of a penalty — and Lee Mason saw that Ramsdale had played the ball with his outstretched foot and had not fouled Vydra. It’s an excellent VAR intervention.”

The Mail on Sunday, however, decided to ignore all that.

“REFEREES’ use of VAR has come under renewed fire after a set of ‘extraordinary’ calls decided the fate of several Premier League games,” Rob Dineen wrote.

“The referee Anthony Taylor overturned his decision to award Burnley a penalty in similar circumstances during their 1-0 defeat by Arsenal. Taylor felt the goalkeeper Aaron Ramsdale’s challenge on substitute Matej Vydra was legimitate [sic] after reviewing it on the pitchside screen.”

They then went on to use Lineker’s tweet to back up their point.

I guess Match of the Day was on too late for them to fix the article before it went to press.

On the BBC programme, Lineker said, rather flatly and confusingly, “Quick look at the VAR turnaround, it looked like he just got enough contact, probably, to turn it around.

“Anywhere else on the pitch, they would have given a foul, and he did give a foul, and obviously they did turn it around.”

I went to check the Mail on Sunday’s thoughts on Calum Chambers being punched in the build-up to the first of Manchester City’s five goals against Arsenal.

Their expert ref, Chris Foy, said, “There is clearly contact between Aymeric Laporte and Calum Chambers, and Chambers goes over. Contact is part of football and not necessarily to be penalised.

“I’m happy with Martin Atkinson’s decision and think the goal would have stood last season as well.”

Now, back to this ‘clear and obvious’ point.

Penalties are a match-changing calls and certainty should be expected. There should be no doubt, no mistake.

Bizarre narrative here. Surely that decision is an example of VAR working perfectly? It was a clear and obvious error as Aaron got the ball cleanly before any contact was made.

Fairly clear and obvious – getting the balk or not in that scenario is black and white factual. Exactly the sort of thing VAR should deal with.

even sean dych said it wasn’t a pen

Would the Mail on Sunday really rather officials didn’t fix match-changing decisions because the mistake isn’t immediately obvious?

Or were they only annoyed by this one because it went in Arsenal’s favour?