Pierre-Emerick Aubameyang contracted malaria while on international duty during the last break but the player has now returned home after two days in hospital to treat the illness. 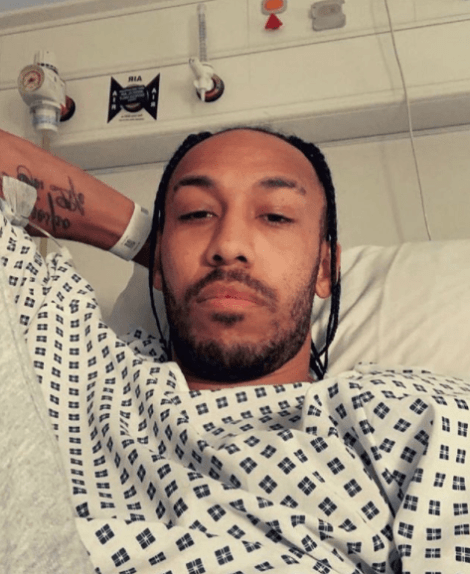 Pierre-Emerick Aubameyang’s recent form and absence has been explained with the news that the forward contracted malaria while on international duty.

“Hey guys, thanks for all the messages and calls,” he wrote on his Instagram.

“Unfortunately I contracted Malaria whilst being on national team duty in Gabon a few weeks ago. I’ve spent a few days in hospital this week but I’m already feeling much better every day, thanks to the great doctors that detected and treated the virus so quickly. I wasn’t really feeling myself the last couple weeks but will be back stronger than ever soon! 🙏🏾 Will be watching my boys now, huge game for us! Let‘s go and get it @arsenal 💪🏾💪🏾”

After Arsenal’s 4-0 win, that saw them make the Europa League semi-final where they will meet Unai Emery and Villarreal, Mikel Arteta was asked about Aubameyang. He revealed that the player had now returned home after two days in hospital and that he prognosis looks good for Arsenal’s captain.

“We just spoke with him,” Arteta said. He’s at home, he’s fine, he’s completely fine at the moment. He had two days in hospital to get the right treatment but he’s feeling good now.

“We’ll see how he recovers. I think he’ll need a few days to recover from that. He wants to be back as soon as possible, that’s what he said to me.

“When he wasn’t involved against Sheffield, two days before he wasn’t feeling good, but nobody could expect that was the case and the doctors took some more tests and that’s when it came out. The doctor realised very quickly what had to be done and they did a great job, and he’s safe and feeling good.

“Hopefully not because he feels really good, that’s what he said to me today, and he really wants to get back, but I don’t know, it shouldn’t take too long.

“Everybody has been in contact with him. He’s been really supportive with every teammate through messages and calls, and he was watching the game like everybody else at Colney with David, Martin, Kieran and everybody that hasn’t been able to be involved and has been missed here. But it is what it is, these things happen and he travelled to this country and picked it up, and this risk always exists.”

Malaria is a preventable, but serious disease that can often be fatal. In 2019 there were 229 million cases of malaria with 409,000 deaths.

It is caused by a parasite that usually infects a mosquito that likes to feed on humans.

It was initially reported that Aubameyang had ‘flu, and there is some crossover of symptoms. High fever, chills and other flu-like symptoms that we all know well are not actually the disease but, as many who have had their Covid jabs will attest, the body’s immune system’s response to illness.

While the flu can also lead to death, malaria is a much more serious illness. It was reported at the end of 2020 in the BMJ that WHO was warning that “African malaria deaths set to dwarf covid-19 fatalities as pandemic hits control efforts.”

They added that “Excess malaria deaths caused by pandemic driven shortfalls in prevention and treatment efforts will probably dwarf direct deaths from covid-19 in sub-Saharan Africa, the World Health Organization has warned.

WHO add, “In 2019, nearly half of the world’s population was at risk of malaria. Most malaria cases and deaths occur in sub-Saharan Africa. However, the WHO regions of South-East Asia, Eastern Mediterranean, Western Pacific, and the Americas are also at risk.”