Alex Iwobi’s nickname, ‘Big 45’, emerged at Arsenal, and the former Arsenal fan favourite has been speaking about it and some of his favourite career moments. 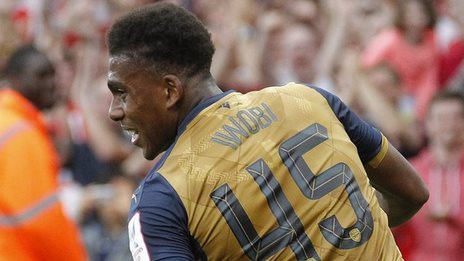 Unai Emery, however, couldn’t find a way to continue his development so, instead, the club shipped him off to Everton where he’s managed just two goals in 22 games for the Toffees (along with one assist).

“I actually loved Big 45 when I came into the scene in the first place, it was a youth team number at Arsenal but they told me to change to a senior number, so the next available that was 17. Ever since then, it’s been that number and you’ve got to love it,” he told Soccer Bible in an Instagram live.

Asked about his favourite career moment to date, it is no surprise that the Nigerian picked out the goal against Zambia that helped his country qualify for the 2018 World Cup.

“I’ve had a lot of happy moments in my career but for me, I will say when I scored against Zambia to send my national team to the World Cup because my parents were there,” he said.

“That’s a special moment, I almost shed a tear on the pitch.”

Iwobi completed a deadline-day move to Everton last summer, in a much busier 24-hour period than expected for Arsenal. As well as selling the winger, they also signed David Luiz from Chelsea and Kieran Tierney from Celtic, despite previous suggestions they’d try to do all of their business early on.

In the end, Iwobi’s move was such a last-minute thing that he was away on a family holiday at the time and couldn’t even undergo a proper medical before the transfer.

“Everything was last minute but I don’t regret the decision. I am happy to be here [at Everton],” Iwobi said. “Honestly, do you know where I was? I was in Dubai on a family holiday and I’d been there for four or five days before deadline day.

“I was on a boat and had to rush back to the sign everything on time, it was crazy. There was one part of me thinking: ‘This might not go through’.”