When Arsenal played Sheffield United back in October, 76% of fans believed Mike Dean robbed us of a penalty, something he did again when the sides met this weekend. 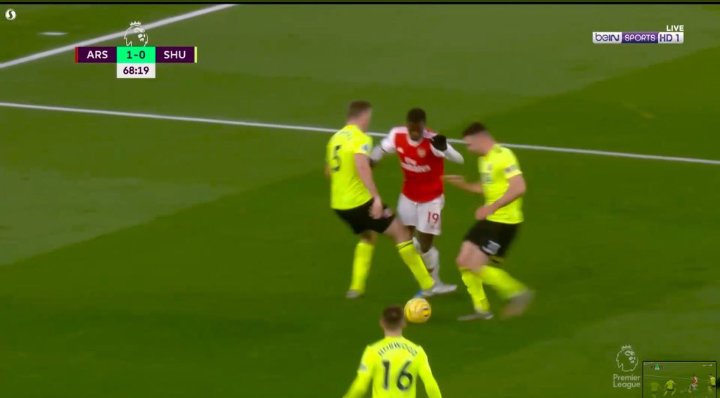 There is no doubt that Nicolas Pepe was fouled in the Sheffield United box on Saturday.

Already one goal up, a second would have secured the game and the points for Arsenal but both Mike Dean on the pitch, and Martin Atkinson running the VAR, waved away crystal clear claims of a penalty for a foul you will see given 999,999 times out of 1,000,000.

In the game against the Blades back in October that Arsenal lost 1-0, there was also a clear pull on Sokratis in the box and the referee that day, the same Mike Dean, didn’t even check with VAR (clip at 1.06 if it doesn’t jump directly to that point).

According to the app, URef, Mike Dean received a pathetic 1.95 out of 5 for his match performance in charge of Arsenal’s game at Sheffield United in October.

During that match, the referee, who loves to be centre of attention, also booked Bakayo Saka for falling over under a challenge (not a foul, not a dive) despite ignoring an actual Sheffield United dive just moments earlier. H also booked Freddie Ljungberg for protesting Saka’s yellow.

Against Sheffield United this weekend, Dean was in charge while Atkinson was on VAR as I mentioned above. Both have refereed four Arsenal matches each this season. Only Newcastle and Bournemouth have had Atkinson as many times as Arsenal and no side has had Dean as much.

As an additional note, Dean has only been in charge of two Sheffield United matches this season – the two against us where he denied a stonewall penalty to the Gunners in both.

Until December, just three referees had taken charge of 60% of Arsenal’s matches this season.

Indicative of nothing, Mike Dean, a Tranmere Rovers fan, hails from a town less than 85 miles from Sheffield. Martin Atkinson, on VAR on Saturday, is a Leeds fan and Lee Mason, the fourth official, is a Bolton supporter.

There are no referees in the Premier League from London.