UEFA have listened to the ECA and have decided to change the UEFA WCL format and reintroduce a group stage that will replace the Round of 16. 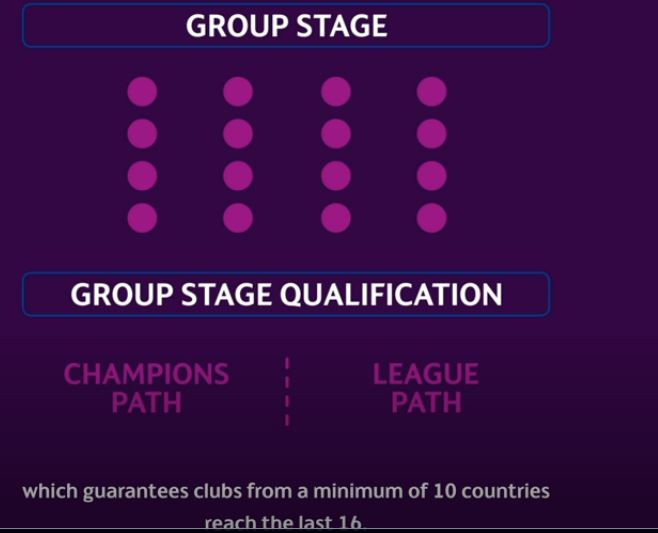 There are also extra places for the top countries, here are the new allocations:

The top-six ranked associations (as per the Women’s Association Club Coefficients at the start of the previous season, i.e. summer 2020 for 2021/22) will each enter three teams.

The associations ranked seven to 16 will each enter two. This is a bonus for the top six associations, who get a extra team while those ranked 13 to 16 also get an extra team with two clubs instead of one.

All the other associations have the chance to enter one team, that being their domestic champion, as before.

UEFA have created a pathway so that as many countries as possible are represented at the Group stage. There will be a minimum of 10 different countries there.

UEFA have also introduced the double pathway, similar to the way the men’s tournament is organised with the Champions path and the League path.

There will be two rounds organised in each pathway: 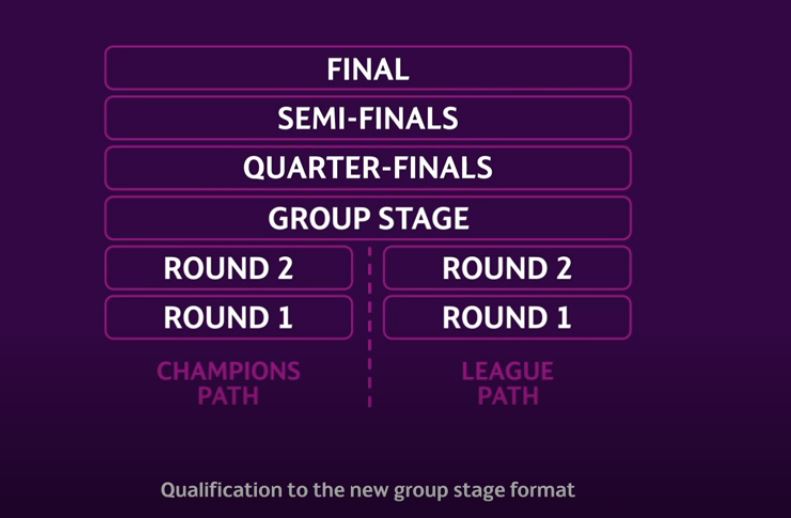 The knock-out system will only come into play at the quarter-final stage with the semi-finals also decided by the classic home and away system.

The teams can enter at one of the three stages: Round 1, Round 2 and Group stage.

Champions path: The champions of associations ranked 7 and below (44 teams maximum)

The champions of the associations entering in this round will be drawn into knockout mini-tournaments. The one-venue tournaments will be played with one-off semi-finals, a third-place match and a final. The final winners will progress to Round 2.

This means the champions of the smaller leagues will have a long road to reach the Group stage.

The one-venue tournaments will be played with one-off semi-finals, a third-place match and a final. The final winners will progress to Round 2.

Champions path: The champions of associations ranked 4 to 6.

The three champions of associations 4 to 6 and the winners of Round 1 will compete in the Round 2 champions path with two legs, home and away. Those three teams would join the 11 Round 1 winners making 14 teams.

League path: The runners-up of the associations ranked 1 to 6.

The Round 1 winners and the runners-up of the associations ranked 1 to 6 will compete in the Round 2 league path with two legs, home and away. Four round 1 winners would join the six runner-ups making it 10 teams.

Title holders, and champions of associations ranked 1 to 3

The Round 2 winners join the four teams entering at this stage. The 16 teams will be drawn into four groups of four.  The teams will play each other home and away over six matchdays.  The top two in each group progress to the quarter-finals.

The format will remain unchanged: two-legged quarter-finals and semi-finals, plus a one-off final at a pre-selected venue played, in principle, the weekend before the men’s UEFA Champions League final.

What it means for the English teams

England will have three entries in the 2021/22 tournament as the Association coefficient is guaranteed to finish in the top 6. What is not guaranteed is finishing in the top three countries at the end of the 2019/20 season.

The ranking for the new format will be taken at the end of this season. England are in third place with 55.500 points and Spain are fourth with 54.000 in the Women’s Association club coefficient table.

As we have seen above, being a top three country is important.

Let’s recap the difference between finishing third and fourth in the rankings.

Third: England’s champion get in at the Group stage.

Fourth: England’s Champion enter in Round 2 and might be eliminated by a champion from another country before the Group stage.

For the runners-up and third placed teams, it makes no difference being third of fourth in the association ranking, they will enter in Round 2 and Round 1 respectively.

So, can Spain overtake England by making up that 1.5 point difference. The answer is probably because the two Spanish teams have drawn each other.

Here is the calculation method:

The season coefficient of an association is calculated by adding up the points
obtained by all its clubs in a given season, then dividing the total by the number
of clubs from that association that took part in the competition.

Clubs which reach the round of 16, quarter-finals, semi-finals or final are awarded
an extra point for each such round. In addition, three points are awarded for
participation in the round of 32. These bonus points are also included in the association coefficient calculation

England and Spain have entered two teams each. So, the total number of coefficient points won by the teams are divided by two.

A reminder of the draw :

Spain are guaranteed a team in the semi-final and their association ranking will go up by 2.5 points after the quarter-finals.

England will get between 0 and 2.5 points in that round. Basically, if Arsenal do not qualify for the semi-finals, Spain will go into third place and send their 2020/21 Champions to the Group stage in 2021/22.

If Arsenal go through, England should be in the lead, but the margin will have decreased unless the Gunners get two wins against PSG. The Gunners would then take on holders Lyon, if things go according to plan, while the Spanish team would face Wolfsburg.

To recap, if the entries were decided today for the new format we would have the following:

There will be certainly some interesting match-ups when we know all the qualified teams at the end of next season.