Until 2018, Arsenal fans under the age of 20 knew only one man to occupy the manager’s office, but how much do they know about George Graham?

That man is, of course, Arsène Wenger.

These Arsenal fans may or may not be aware that if it wasn’t for Arsène, a certain George Graham would almost certainly be acclaimed as Arsenal’s most successful manager since Herbert Chapman.

Incredibly, in stark contrast to the half a century which lay between Chapman’s death from pneumonia and the appointment of George Graham in 1986, just 18 months separated Wenger’s arrival and Graham’s departure.

Either we were very lucky, or David Dein really was a genius.

That’s 16 major trophies across 27 years, or a trophy every 19 months.

When you think that this run includes the nine years without any silverware that nobody ever mentioned, it’s quite an incredible haul.

It’s also one that George can feel justifiably proud of contributing to.

Yet, unless you know your Arsenal history (of course, lots of you reading will), all you know about our very own Double G may be that he had a spell managing that lot up the road.

Maybe you know that he can claim the unfortunate distinction of being sacked by both clubs- I’m sure you’ve heard whispers about brown envelopes, right?

Although it didn’t quite sit right for a man, who apparently has a shrine to Arsenal Football Club in his house, to be degrading himself with that lot, I remember kind of feeling, “So what?”

This was no Sol Campbell, a man at the height of his powers, defecting up the road.

No, Arsenal had had nine largely golden years with George, it had come to an unfortunate end and he’d been moved on.

On the other hand, as evidenced by the Premier League and FA Cup trophies gleaming away in our trophy cabinet, our new man was doing very well indeed. In fact, it seemed that the Spurs fans were a lot angrier about his appointment than we were.

Aside from the fact that George was now managing the enemy- to me, at least- he wasn’t really THE enemy.

He was more of an agent of chaos sent in to disrupt Spurs with all their talk, always the talk, of the glory game.

I still maintain to this day, though this has no basis in fact whatsoever, that George probably used his position as Spurs manager to encourage their captain to make that momentous switch in the summer of 2001.

In the interests of balance, I should say that George’s decision to substitute David Ginola, his best player, at Old Trafford on the last day of the 1999 season when we needed a Spurs win to retain the league title doesn’t speak to a man who was too bothered about helping his former employers.

It was easy for me to be blasé about George being the Spurs manager though, I had other things to worry about when he began his tenure in the north London badlands AKA Middlesex.

I had just begun a year’s “study” in Bilbao, so I couldn’t really have been less disconnected from events in north London if I’d tried.

We know, us students of Arsenal history, how well George did for us. “Arsenal are back”, “It’s up for Grabs Now!“, the almost Invincibles, Linighan’s last minute heroics and the astonishing display of resilience in Copenhagen 21 years ago are seared into the consciousness of this club just as much as anything that followed.

But how did George Graham do for Spurs? 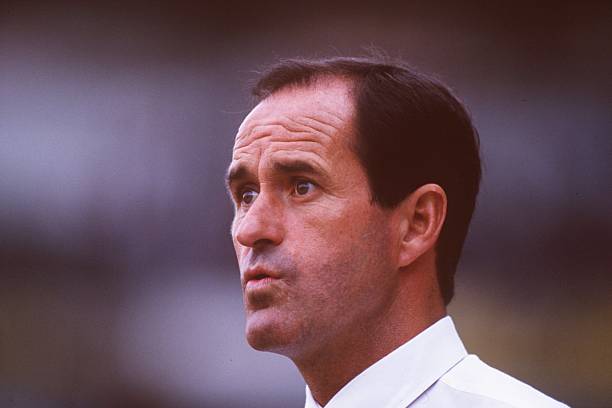 So, that’s something, right?

He also took a club that had finished 14th in 1998- as we were parading our two trophies down Upper St- to a more respectable position for a club of Spurs standing.

In 1999, they finished 11th, the year after 10th and, although he was sacked in March 2001, they finished 12th- which is, spookily, exactly where we had finished in George’s curtailed final season with us six years previously.

Of course, we know stats like these are mere trifles when compared to the most important ones of all- just how did George Graham’s Tottenham teams fare against the Arsenal?

Well, just a month after taking charge, he somehow left N5 with his dignity intact as our champions of England dominated Spurs but found them as frustratingly resilient as we were used to being and could only draw 0-0.

The return fixture, a must win for our title chasing heroes in our penultimate away game, saw us take all three points.

The highlight of this game had to have been one of those goals that only Kanu could have scored.

Why try and describe it when you can see it here?

The following year saw us beat Spurs at home, 2-1, but lose at the Lane by the same score.

It’s hard not to feel that George Graham’s influence had less to do with this result than the red cards issued to Freddie Ljungberg and Martin Keown.

Even then, I seem to recall Spurs were slightly lucky to take all three points, but take them they did.

Allied to the League Cup win later that season, this last win against Arsenal for 10 years must have represented their own annus mirabilis just a year after our own.

In George’s final season with Spurs, they survived yet another second half battering and looked to be taking all three points.

God, he loved scoring against that lot, didn’t he?

Unfortunately, in a bid to deArsenalise Spurs, George Graham was removed from his position just two weeks before the first of two north London derbies in quick succession.

In the first one, our #7 Robert Pires, paid a fitting tribute to the man who had once worn the same shirt with such distinction.

David Rocastle (once the author of another great NLD moment) had lost his battle with cancer earlier that day and, in front of an emotional Highbury, it was Pires who scored the game’s winning goal.

By the time the FA Cup semi-final rolled around eight days later, Glenn Hoddle (THE MESSIAH!) was installed as Tottenham’s manager and didn’t the Spurs fans let us know about it?

“We’ve got our Tottenham back!” they crowed.

Gary Doherty’s early goal was never going to be enough when weighed against an elemental performance from our skipper, Patrick Vieira.

He didn’t really like losing to Spurs, did he?

I think, when you look at the contributions George Graham made to both clubs, you see the difference in both. Sure, George repeated his feat of winning the League Cup in his first season at Arsenal with Spurs, but the similarities ended there.

At Arsenal George was given time to build a legacy, time you have to say, he ultimately squandered.

However, he created some fantastic Arsenal sides and, despite the brown envelope, will be rightly remembered as one of the great Arsenal managers. You can tell from his TV appearances alone that he still loves us.

I suspect that at Spurs, George Graham will be remembered as just another one of those trying, and failing, to compete with the manager three miles down the road, in and out of the revolving door before the ink was dry on his contract.

Lee Hurley - Nov 18, 2020
Bernd Leno has become the latest Arsenal person to give his opinion on Mesut Ozil and his situation.

25 years on: The day that changed Arsenal forever

Paul Williams - Feb 21, 2020
20 years ago Arsenal sacked George Graham. Little did anyone imagine the chain of events that would unfold.

George Graham: 2 sides of the fierce and bitter Arsenal and Tottenham divide

Paul Williams - Nov 30, 2019
Until 2018, Arsenal fans under the age of 20 knew only one man to occupy the manager's office, but how much do they know about George Graham?

Dan Critchlow - Jan 14, 2018
As pressure grows, again, on Arsene Wenger to call it a day on Arsenal, the Arsenal manager represents the last of his kind - a long-term club man in a world that has moved on without him.

Graham: Wenger should move on