This week it was announced that Arsene Wenger had found a publisher for his much-anticipated autobiography.

On this week’s Daily Cannon podcast, which you can listen to here or subscribe too in all major podcast apps, host Stephen Bradley and regular guests Anita Sambol and Paul Williams, threw out some thoughts about what Arsene Wenger’s book won’t contain.

Anita: And I will still read it.

Stephen: And so will I. And I will buy it and I will put 10 quid in his pocket. But people expecting something like Roy Keane’s autobiography, I fear, are going to be sadly disappointed, just because I think he’s too classy to do it.

Paul: It’d be great if the last line was “by the way, Alex Ferguson is a *bleep*”.

Paul: No, I don’t think he would either. Far too much class.

Stephen: Roy Keane got banned for his. He got six weeks for saying exactly what Paul said. When he broke a leg. On purpose. Literally. Quote, take that you *bleep*, unquote.

And Eamon Dunphy, his ghostwriter, was dictating this down and he said, ‘do you want me to put this in?’ He said, ‘quote me’.

We’re not going to find out who gave Cesc Fabregas the idea throw pizza at Ferguson. 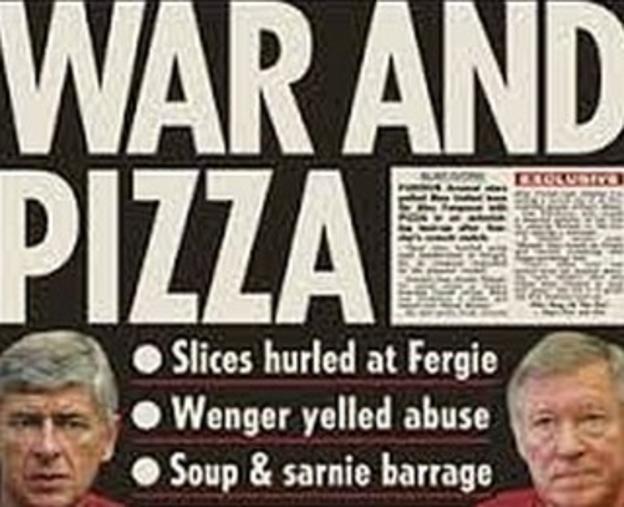 Paul: I think he’ll do the translation himself.

Stephen: Who should be the voice for Arsene Wenger’s audiobook?

Paul: I have to say, I would find it very difficult to listen to him doing the audiobook.

Stephen: That would be funny if he did a chapter…like treat it like the Father Ted golden cleric speech and he said, ‘right and now we move onto liars’ and he just did a chapter on everyone he hated and then got them to do the audiobook on their own chapter.

Anita: You know who I always like listening to when he gave interviews after the match? Theo Walcott.

Anita: No I mean, you know, his English and stuff.

Stephen: Whatever you’re into yourself, Anita, I mean, Christ. It’s 2019. We’re not judging, but Jesus.

Stephen: No, he’d read it in Italian.

Paul: Fair play to him for trying. No, I think that’s really good. You know, you get players that go and travel and they don’t try and integrate at all. And for him to try and speak Italian in his first press conference, I have massive respect for that guy.

Stephen: I remind you that Gareth Bale also tried to speak Spanish in his first press conference and five and a half years later he’s still trying. And can’t.

Paul: Especially when you think footballers have all that time on their hands.

Stephen: It is a weird one. I’m reminded of the story of Stephen Fry doing the Harry Potter books and there’s a phrase in it that he can’t pronounce ’cause he’s got a slight speech impediment.

He actually rang JK Rowling to say, look is there any way I can say this a different way? Because I can’t say “Harry pocketed it”. And she went, ‘No. I want it read the way it’s written because I want 8, 9, and 10-year-olds to follow it word-for-word while it’s being read to them’. Which is great, which is why, you know, they’re so popular. Because the kids can literally follow it word-for-word. And he went ‘grand, that’s no problem. Sorry to bring it up’. And she went ‘fine’.

And then in every other book she put that same phrase in just to piss him off.