Lauren Hemp will serve a one-game suspension following her red card but could see her ban increased which would cause a few problems.

The England u19 forward Lauren Hemp was sent off against Spain in the second group game of the u19 Euros for what looked like an accidental ‘stamp’ on the highlights video. She was automatically suspended for one game, against Belgium, but will learn her fate next month in regards to an additional suspension.

Hopefully, UEFA will look at the replay and leave it at a one-game ban because a longer suspension would have a knock-on effect on her senior career.

Here is what UEFA told me:

The player received a red card during the match against Spain and is suspended for at least one match (served against Belgium).

The final decision regarding the extension of the ban will be taken at the next Disciplinary meeting on 22 August.

Should the ban be extended, we need to have a look at the competition regulations to see where and when the ban would apply. 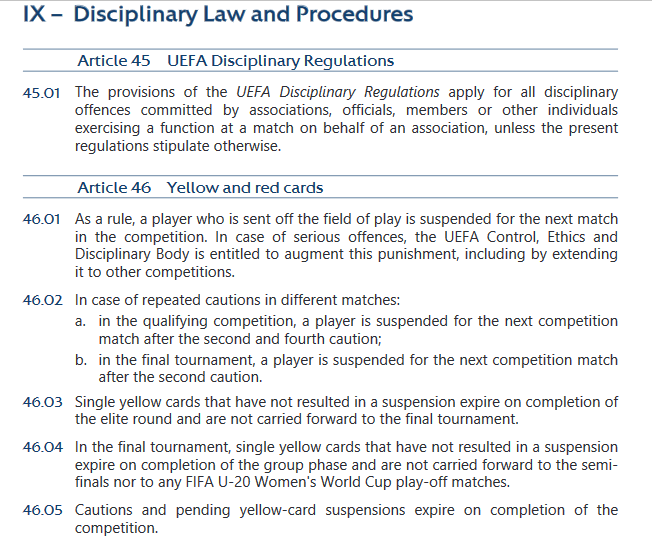 Article 46.01 has been applied and Hemp missed the Belgium game.

Article 46 does not mention what happens after a player has been given a red card at the end of her tournament, so we have to look at Article 45 that tells us to look at the general UEFA Disciplinary Regulations.

Here they are, with attention paid in particular to Article 68: 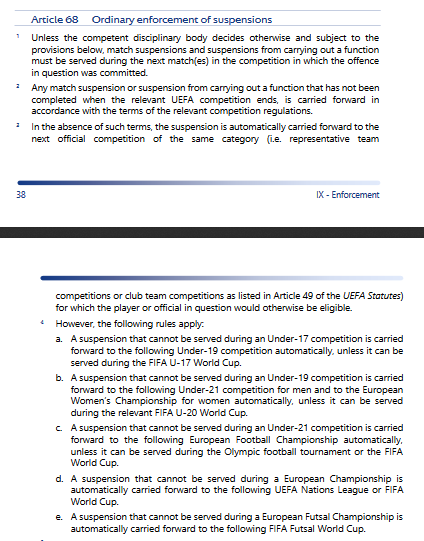 Point 1 relates to the Belgium game and an automatic one-game ban. Obviously, with England eliminated from the tournament, any extra bans cannot be applied in that tournament.

Point 2 tells us that any potential suspension will be carried forward according to the tournament regulations. As mentioned above, Article 46 does not give us any indication of where that would then apply.

Point 3 tells us that any extra game(s) would be carried forward to the next UEFA u19 tournament, except Lauren Hemp will not be eligible for the 2019/20 UEFA u19 Euros as she was born in 2000.

Unfortunately, England are the hosts so there will be no qualification games for the Lionesses to serve any suspensions. Lauren Hemp would therefore have to serve a potential suspension for an offence in the 2019 u19 Euros during the 2021 senior Euros’ group stages.

Point 4c is probably not relevant as the terms mention u21 competitions and not the u20 i.e. it applies to the men’s game only. But it shows that the Olympic tournament can be used to serve a suspension from a youth tournament.

In that case, the next senior tournament for English players is the Tokyo 2020 Olympics and not the 2021 Euros.

Now obviously Team GB competes at the Olympics and not England, but Lauren Hemp is eligible to play. To me, it looks like a massive grey area as UEFA and FIFA should allow men and women’s Olympic tournaments to be on equal terms regarding serving suspensions.

Let’s hope the one game ban will stand next month and that Lauren does not have to miss at least one game of her first senior tournament, especially as the foul really did look like an accidental coming together.