Arsenal play Barcelona on Sunday evening in their final pre-season game and the starting lineup could well be the one that starts against Newcastle when the Premier League returns next week.

Arsenal will fly to Barcelona on Sunday afternoon, arriving from London Stansted at around 12.30pm. They will return to London immediately after the game.

Barcelona are expected to welcome back Luis Suarez and while most outlets report that Lionel Messi will not be involved, AS says he will after his Copa America exploits.

But how will Arsenal line up?

Laurent Koscielny is still refusing to play, Hector Bellerin is still recovering and Rob Holding has only just returned to training meaning none of this trio will play, although Holding is the closest of all three to a comeback.

Konstantinos Mavropanos and Emile Smith Rowe are both still unavailable.

Alex Iwobi is still on holiday following his Africa Cup of nations participation.

Dan usually does these predicted XI’s but he’s on holiday so it’s left to me. I’m going to be honest, I haven’t a clue how we will line-up and I’m pretty sure I forgot about 33% of our players. 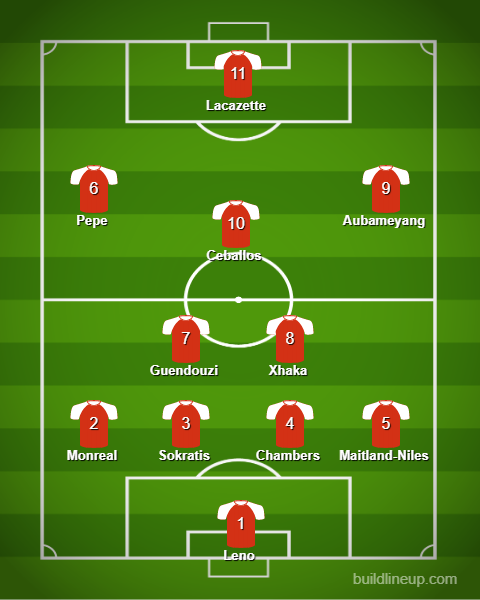 With Lucas Torreira only just returning and Nicolas Pepe only just arriving, we could well see those two start from the bench.

In that case, don’t be surprised to see Matteo Guendouzi and/or Joe Willock and Gabriel Martinelli come in to the side in their places.

Lacazette is still shaking off a ankle knock and may only start on the bench even though he says he’s fine.

Mesut Ozil and Sead Kolasinac could also be involved after their ordeal with some carjackers, but I wouldn’t be surprised to see Ceballos start in front of the German.

All Arsenal’s pre-season games have been shown on Premier Sport and this one will be no different.

The game will also be shown on:

Patino full debut: How Arsenal could line up vs Nottingham Forest

Partey to stay: How Arsenal could line up vs Manchester City