Arsenal aren’t interested in a loan-to-buy deal for Lucas Torreira and they’d want at least €50m to sell him, according to reports, but the player has said he’s happy, contrary to those same reports.

The usually reliable Di Marzio reported late on Tuesday that AC Milan are trying to formulate the right offer to convince Arsenal to sell Torreira this summer.

According to the Italian outlet, Milan plan to offer €5m upfront for a two-year loan with a purchase option of €30m.

Obviously, this would be a completely ridiculous offer. Arsenal only bought Torreira for €30m last summer, so to sell him on for just €5m more and not receive the majority of that money for another two years – if at all – would be mad.

Thankfully, Twitter account NonEvoluto, generally pretty well-informed on Milan business, claims Arsenal aren’t interested in a loan-to-buy offer. They add that €50m would be needed for the Gunners to come to the negotiating table for Torreira.

Most likely, Milan aren’t going to be willing to pay that much (and Arsenal aren’t going to sell anyway), so that should spell the end of the story. It won’t, but it should.

As for the reports of Torreira being unhappy at Arsenal, those have also been debunked.

Sam Dean of the Telegraph reported that the midfielder is happy at Arsenal and by no means desperate to leave. According to Dean, claims that Torreira wants out because of the weather are “bullshit”.

That wasn’t enough for some so the player said it himself: 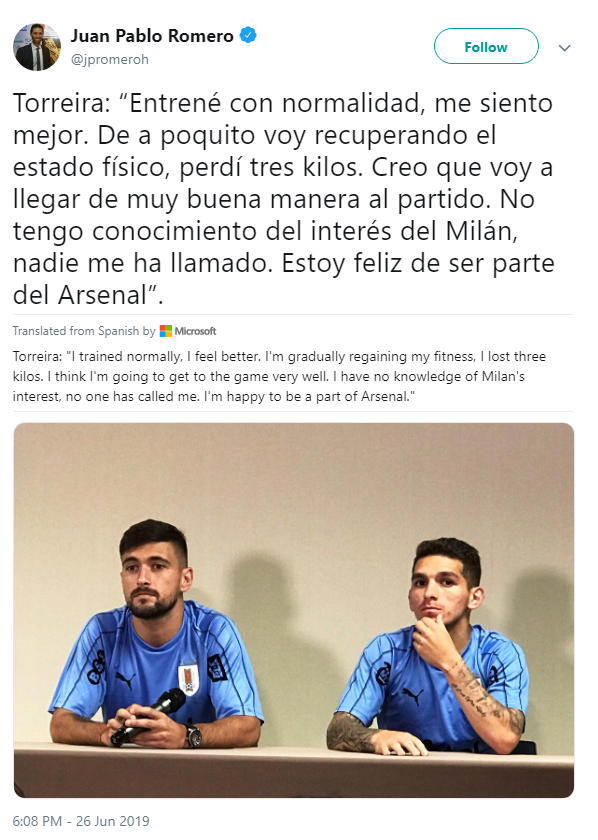